What is Delhi Metro's daily driver base

The Busan Metro (Korean: yes 도시 철도; Hanja: 釜山 都市 鐵道; RR: Busan dosicheoldo ) is the urban rail system operated by the Busan Transportation Corporation in Busan, South Korea. The metro network was first opened in 1985 with seventeen stations. The subway itself consists of 4 numbered lines that cover a distance of 116.5 kilometers and serve 114 stations. Including the BGL and the Donghae line, the network covers a distance of 168.4 kilometers and serves 150 stations.

All signposts on the Busan Metro are written in both Korean and English, and the voice prompt on the trains indicating the upcoming station, possible line transfer and the exit side is spoken in Korean, followed by English. Station announcements for incoming trains are in Korean, followed by English, Japanese and Mandarin. All stations are numbered and the first digit of the number corresponds to the line number, e.g. B. Station 123 is in line 1.

The metro map contains information about which station and which numbered exit from that station to use for the main attractions. Photography is permitted on the Busan Metro.

The Busan Metro Line 1 (1 호선) is the north-south route. It is 39.8 kilometers long and has 40 stations. [4] The line uses trains that each have eight cars. The total construction cost was 975.1 billion won.

Plans for this line were made in 1979. Two years later, in 1981, construction began on the first phase between Nopo-Dong (now Nopo) and Beomnaegol, which was completed in July 1985. This route was 16.2 kilometers long. Further expansions continued to the south: a 5.4 kilometer long extension from Beomnaegol to Jungang-dong (now Jungang) was opened in May 1987. A 4.5 kilometer extension to Seodaeshin-dong (now Seodaeshin) was opened in February 1990. and a 6.4 kilometer extension to Shinpyeong opened in June 1994. [4]

The extension of the route to Saha-gu from Shinpyeong to Dadaepo Beach (7.3 km) was completed in mid-April 2017.

The Busan Metro Line 2 (2 호선) crosses Busan from east to west, along the banks of Haeundae and Gwangalli, and then north towards Yangsan. It is 46.0 kilometers long and serves 43 stations. The line uses trains with six cars each.

Phase 3, which began in 1998, extends line 2 north of Hopo to the city of Yangsan. The phase was originally intended to add another 11.3 kilometers with an additional seven stations to the route. On January 10, 2003, line 2 was extended 8 kilometers to the current end point of Yangsan, but only three of the originally planned seven stations were in operation. The Yangsan Campus Station of Pusan ​​National University, which opened as the fourth station in Phase 3, opened on October 1, 2009. [4] The city of Yangsan then abandoned the completion of the expansion and the construction of the last three stations.

An extension of Line 2 to the eastern end of Haeundae-gu is planned. When this extension is opened, 4 new stations will be added to Line 2. Named munjeon, the station was renamed Busan International Finance Center, Busan Bank

Construction of Busan Metro Line 3 (3 호선) began in November 1997. The opening was delayed many times over, but Line 3 was finally put into operation on November 28, 2005. The 18.3 kilometer route [4] served 17 stations. Line 3 uses 4-car trains. The estimated construction cost of the first phase was 1,688.6 billion won, with the second phase being split into line 4.

After the "Daegu Subway Fire" in 2003, it was decided during construction to install screen doors on all platforms on Line 3. This is one of the few lines in Korea and around the world that has screen doors installed in every station. Line 3 greatly improved the subway transportation system by connecting the Suyeong and Yeonsan-dong regions and the Yeonsan-dong and Deokcheon regions.

The Busan subway line 4, too Called the Bansong line , is a rubber-tired subway system that serves Busan in the north and northeast. The line was originally planned as an extension of line 3. Using the automated lane transit technology and the extension from Minam to Anpyeong, Line 4 comprises 14 stations and a distance of 12.7 kilometers. [4] Originally planned for 2008, the line opened on March 30, 2011. [4] Of the 14 stations, 8 are underground, 1 at ground level and 5 above ground. Each train has 6 carriages, although each car on line 4 is significantly shorter than the carriages on the other lines in the Busan subway system.

The Busan-Gimhae Light Rail Transit is a light subway system that connects the city of Busan with the neighboring city of Gimhae. The line opened on September 9, 2011. It is operated by B&G Metro. The line has 21 stations, including two stations, Daejeo and Sasang, from which you can change to Line 3 and Line 2, respectively. The line serves as an inner-city transit for Busan and Gimhae, an inner-city network connecting Gimhae and Busan, and a new way to get to Gimhae International Airport.

All 21 stations are above ground and each train has 2 cars.

The railway line along the coast is being expanded for commuter traffic. Every 30 minutes (15 minutes peak) the trains are to be extended to Taehwagang station in Ulsan until 2021.

A single fare (as of June 1, 2014) is 1,300 won for a destination within 10 km and 1,500 won for all other destinations. Tickets are sent to " Ticket machines Most machines accept 1000 won banknotes as well as coins. Tickets should be kept as they must leave the train station once they reach their destination. A heavy fine is imposed if they are caught "jumping over the gate" .

Using a metro pass, either a Hanaro Card (하나로 카드) or a Digital Busan Card (디지털 부산 카드), offers adults a 10% discount and teenagers 13-18 years old a 20% discount. Both the Hanaro- as well as the Digital bus Cards are available either in card format or in a more compact but slightly more expensive cell phone accessory format. The passports are equipped with a microchip and are scanned by placing them against sensor plates at the entrance and exit of stations. This makes them more efficient than magnetic stripe cards because they can be recognized by a wallet or purse. Hanaro cards are available at all stations for 2000 won. All types of passports can be issued at any station of the " Automatic Charge Machine "(교통 카드 자동 보충 기) credit can be added. Instructions are available in both English and Korean. The passes can also be used to pay for bus fares and purchases at specially equipped vending machines across the city. 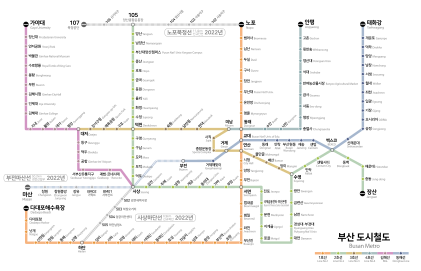 The Lost property office is located on the Line 1 platform at Seomyeon Station. It is open during the day of the week and on Saturday mornings. Unclaimed items are held for 7 days before being handed over to the police.

On May 25, 2006, TU Media began to supply the entire underground network with S-DMB services. The current S-DMB broadcast enables the subscriber to receive television and radio reception on a portable device such as a cell phone. With an investment of 11 billion won, TU Media installed 530 signaling devices to ensure seamless reception throughout the underground system. [5]