How do fish spawn 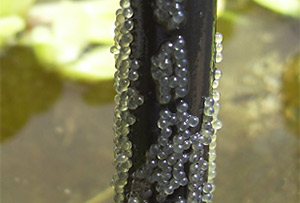 The eggs of animals that lay eggs in the water are called spawning. This includes fish and amphibians, but also water snails.

In the case of fish, the female ("Rogner") lays the spawn.

As long as it is still inside the ovaries, this is also known as roe.

The Rogner lays this spawn on aquatic plants or on the bottom of the water.

Immediately after weaning, the eggs are inseminated by the male ("milkner"). In contrast to prison spawners, free spawners release their eggs into the open water.

Doctor fish, for example, show what is known as a “deep jump”: According to a certain behavior pattern through which males and females synchronize their swimming behavior, they quickly rise several meters upwards.

This causes, among other things, an expansion of the swim bladder and thus a higher internal pressure in the fish.

This enables eggs and sperm to be expelled more quickly and easily. Some fish create spawning pits on the bottom, which in large species such as the huchen or salmon can be up to two meters wide.

During the spawning season, the males of some carp species develop a keratinized skin known as a "spawning rash".