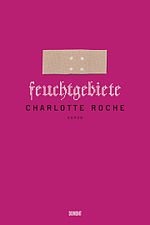 A small but deep insight into the world of thoughts and experiences of a young woman.

We want to improve the website for people with visual impairments. You can help by describing the book cover!

What is it that bothers, repels and fascinates people in terms of directness and openness at the same time? Do words like pussy and ass fuck really cause irritation these days? Or is it more the fact that they are needed by a young woman, and that in public and without any false shame?

Charlotte Roche is a young woman in her late twenties, married and has a young daughter. She grew up here in Germany - not in a distant country where it is socially recognized or desired that women express themselves in this way. No, she lives here. And surprises us all with her heroine Helen from "Wetlands", who seems to have a very experimental approach to her body. She knows every hidden corner in and of itself, every reaction that the body can produce and follows with great curiosity all processes of pleasure, digestion, wound healing and secretion formation in her body. A great preference seems to be to tell others about their findings and experiments and thus mostly offend them in order to then evaluate their reaction for themselves.

So far so good. The shocking thing about it - because quite a few other people have also reached this point - is Helen's aggressive and confrontational handling of her findings, which she trumpets and brings "to the man". Appropriate or not, Helen says it or even shows it. It conveys an extremely reflective and fun-loving impression, which simply has to be refreshing, even if the disgust limit is surely exceeded for some.

The frame story is told quickly and while reading it you can choose how much weight should be attached to it. Helen is in the hospital. She is an "ass patient". In an unsuccessful ass shave, she tore a tear in her anus that turned into a full-blown anal fissure and has to be surgically removed. Her parents are divorced, live separately and each with new partners, which Helen cannot accept and therefore ignores as best as possible. In the hospital bed, she got the idea that she could use her situation to reunite her parents, who were tormented by worries about their sick daughter, in her hospital room. When her plan threatens to fail due to the cooperation of the other people and Helen is supposed to be released due to recovery, she even goes so far as to re-injure herself in order to buy more time. But as so often in life, everything turns out differently than expected ...

The author Charlotte Roche also uses Helen's time in the hospital to illustrate her thoughts, habits, likes and dislikes. A big topic here is the existing hygienic mania, which Helen's mother, for example, is very indebted to and which she wanted to pass on to her daughter - far from it! Helen does just about anything to prove to herself and the world that a few bacteria don't kill anyone, be it her own or someone else's. She willingly takes everything in and is happy to pass on everything her body produces. A self-made, used and therefore bleeding tampon is used in the elevator, or a few drops of pee on the floor, which in Helen's imagination are then distributed around half the hospital on the shoes of the doctors and nurses. The subject of sex and thus also masturbation are not taboo for Helen. You can experience everything if you or a woman demand it. It describes in great detail what is fun for Helen, what she gets excited and also what she tends to reject due to less positive experiences.

Helen is breaking into domains in many areas that are otherwise apparently reserved for men only. So she has made it her goal to become a good “freer” in brothels in her city in order to savor all experiences - in open exchange with women, both physical and verbal. Another hobby is her breeding of avocado trees that Helen cherishes and cares for (even in the hospital!) so that they can produce beautiful, slippery kernels that they can then use as natural love balls.

Helen's emotional world is not withheld either. Central is her confusion about the happenings within the family, which she rarely visits - always separately from each other - and, according to Helen's memories, has a lot to deal with, but would like to prevent this with all the might of silence. Nobody speaks plain language - Helen has to answer to clarify and to say, no matter what the cost! Consequences are secondary.

And then there is Robin, the nice nurse who made Helen more exciting and more beautiful her time as an ass patient. Even if he doesn't really know how to react to Helen's offensives at the beginning. He willingly photographs her ass wounds for her so that Helen can see for herself what was being snipped on her body. The impression quickly arises that very gentle feelings arise between them, which may also represent a substitute for the lack of family ties. And which then ultimately turn out to be much stronger than is foreseeable at the beginning.

But what prompted some critics to relate this book to emancipation or feminism? So what does all of this have to do with emancipation?

This book stimulated me to rambling lines of thought, even if not all of them are directly addressed in the narrative and a lot is perhaps just supposed to have a provocative effect on our well-behaved side of the personality. Is this the latest way of dealing with yourself, your body and your needs, which, as is well known, has already undergone countless changes and influences? Well, why not, I asked myself. But are the men already ready, for example, to speak in public about all their bodily functions without shame? And not just about those who might impress others? So far, I have heard only a few people openly talk about their bowel movements when they are not sitting at the doctor's, but perhaps more in the evening with friends over a bottle of wine. Helen is a little further: things and processes that affect each of us don't necessarily have to be hushed up as if they simply didn't exist! Many men trumpet their sexual escapades, be it on the train, at work, at school - no open ear is spared. Then why should it be a sacrilege to hear something similar from the mouth of a young woman? Who or what tells us which gender has to behave and how, which experiences may be made, and who is allowed to talk freely about which impressions and who is not? Who says that a woman's body must always be freshly showered and smell of flowers? We are not! We are not perfect - neither the character nor our body! That is the responsibility of all human beings, and the further time goes on, the less we can stand by who we are. Organisms that work within themselves, that break down over the years, that produce odors and waste - and nobody is immune to them. But it doesn't have to be a woman either, because, as Helen shows us a bit, none of this is anything to be afraid of, to be ashamed of or to be veiled every day. An open approach to our “imperfectness” and our humanity would be appropriate and would certainly take away a large part of the system-specific pressure to perform that exists anyway. Yes, there is a reason why people emit different kinds of smells, not just to signal to other people: “Hey, I haven't showered for four days!” No, smells are now proven to be responsible for finding partners, for example, or at least helpful. Hair on legs and in the genital area also had its purpose and use at some point, whereas today it is a sign of neglect. Many even find it disgusting when a woman dares to wear hair under her skirt in summer. Obscene! Not adapted to the ideal of beauty! Men are not subject to these constraints: Chest hair and strong leg hair are generally regarded as a sign of unrestricted masculinity. Correct! That's right, that's what nature intended. A revolution would therefore be if the good old pubic triangle and light leg hair were a sign of wonderful femininity that could be left in its natural state because it is beautiful and normal to be naturally feminine.

All in all, “Wetlands” is a book that is very well worth reading, as the discussions after its publication show us that, despite centuries of fighting, we still seem to live in a patriarchal system. Instead of dealing with the topic, unfortunately, mostly only written and spoken about Roche's alleged border crossings. Do yourself a favor and make your own picture of the book.

The contents of this website or document are licensed under the Creative Commons Attribution-Non-Commercial-No Processing 3.0 Germany License. Permissions beyond this license can be obtained from our contact page.

Unless otherwise stated, all images are excluded from this licensing! This applies in particular to the illustrations of the books and the edition images.