How many people use price comparison services

Unsexy, underestimated and incredibly successful: that's how much money there is in the market for price comparison services

We'll tell you which players are the most successful 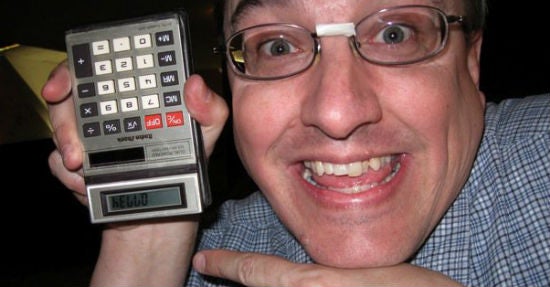 Price comparison portals may be far from being the new "hot shit" in online marketing - and yet they generate billions in sales every year in German online shops alone. A study that is exclusively available to Online Marketing Rockstars is now shedding light on the market for the first time and revealing the providers with the highest sales.

"I estimate that price comparison services in German e-commerce generate monthly sales in the three-digit million range," says Ralf Priemer, co-founder and managing director of Channel Pilot. The total sales volume that online shops generate via such services should accordingly be in the billions of euros. 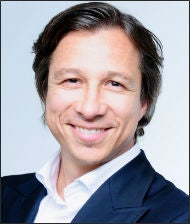 Priemer should know what he is talking about: His company's customers currently have a monthly turnover of 45 million euros via price comparison portals and product search engines. Channel Pilot, founded in 2011, is one of several companies (other providers include Feed Dynamix and Products Up) that is active in the comparatively young market for so-called product data marketing or feed engine management. With this type of marketing, online shop operators use software to automatically transmit information about the items in their range in the form of a product data feed to marketplaces, price comparison portals and other product aggregators that have built their own reach. In addition, shop operators can use the software to optimize their activities on such portals and, for example, adapt their prices to those of their competitors. According to the company, the channel pilot software has interfaces to 2,000 shopping channels. 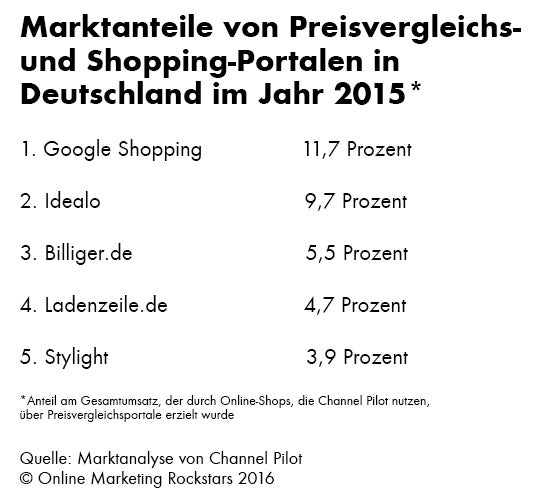 Exclusively for Online Marketing Rockstars, the company has determined which of the price comparison portals generated the most sales for channel pilot customers in the past year. "We have 500 German online shops as customers who get 40 million clicks a month through price comparison services," says Ralf Priemer. Channel Pilot's software is used, for example, by various Otto Group companies (such as Bon Prix, Baur and About You) as well as Cyberport and Obi. "30 percent of our customers belong to the top 500 shops, three belong to the German e-commerce top 10." Channel Pilot works for shops of all sizes and from all industries. “If you assume that there are between 5,000 and 6,000 shops in Germany with a turnover of 100,000 euros or more that place their products in price search engines, we would cover eight to ten percent of the market. This means that our data does not yet allow a statistically valid extrapolation for the overall market - but tendencies can certainly be read off. "

The evaluation of the channel pilot data shows that Google has apparently usurped the market leadership among price comparison services within the last few years. And that after the company had played a rather subordinate role in this area for a long time. What used to be called Froogle and Google Product Search and was free, was converted to a paid model by the industry leader from Mountain View in 2012: so-called Product Listing Ads (PLA), with which advertisers can place their products on Google Shopping. In the meantime, product advertisements have become the largest growth driver for the group in its home market, as an analysis by the US performance agency Merkle RKG shows. In contrast, the business with normal text ads is currently growing only slowly.

The PLA has also existed in Germany since February 2013. Since then, various competitors have only seen Google's taillights: There are significantly fewer companies and portals such as Ciao, Kelkoo, Yatego and dooyoo in the market; Guenstiger.de, for a long time one of the larger German players (and already bought up by the US company Nextag in 2011), is no longer in the top 5 today.

Is Google actively discriminating against competitors?

“There has been a consolidation and displacement in the direction of Google in the market,” says Ralf Priemer. “In the past few years, Google has strongly pushed its own product, Google Shopping, and has thus risen to become the market leader. When we win new customers, it is almost always the most exciting thing for them to be represented on Google Shopping - and only then do other providers come. ”For many classic providers, the organic results from Google were an important and cheap source of traffic. "Because they are now ranked worse and worse by Google after various algorithm updates and some penalties, they have lost traffic and thus market share." As early as 2014, several market participants suggested to Online Marketing Rockstars that they were deliberately discriminated against by Google.

The Axel Springer Group can obviously hold its own against Google. For some time now, the media company has held a majority stake in Idealo as well as in the row of shops and shop-alike operator Visual Meta. If you add up the sales shares of the storefront and Idealo determined by Channel Pilot, Springer is even ahead of Google.

The two largest players in the market are likely to generate substantial sales with their services. If a visitor to a product search engine clicks through to one of the shops represented there, the respective shop operator pays the price comparison portal for this visitor. “Our customers pay an average of between 25 and 30 cents for a click,” says Ralf Priemer. If this is offset against the 40 million clicks that the Channel Pilot customers register monthly through the price comparisons, then one comes to ten to twelve million euros in traffic costs, which the Channel Pilot customers alone pay monthly to the portal operator. So if Channel Pilot covers eight to ten percent of the total market, German online shops probably spend a high double-digit to low triple-digit million euro amount per month for clicks from price search engines.

While the classic, local providers are finding it increasingly difficult to survive in the increasingly fierce competition for these budgets compared to Google, for a few years younger providers have been celebrating considerable success in the market with different models. “Last year we were impressed by the development of providers such as Stylight and, as a hidden champion, Stylefruits,” says Ralf Priemer. "These services correspond to a classic price search engine in technical terms, but rely on a completely different type of product presentation to the outside, reminiscent of a premium fashion department store or a fashion magazine." A look at the portals mentioned shows how much their operators rely on content and set product staging. For example, items of clothing are shown to well-known or emerging stars, similar to celebrity magazines. “The users have fun clicking through,” says Priemer.

With this type of content, it is obviously comparatively easy for the site operators to acquire traffic via social media. Stylefruits in particular is evidently very successful in directing visitors to your own page via Facebook. The site has three million fans and high engagement rates on Facebook. The Stylefruits operators are therefore not as dependent on Google as a traffic channel as other providers.

In addition, the new fashion search engines are opening up a new target group for price comparison services - which tend to have male users - namely young women. "These new models are currently successfully chasing market shares from some of the classic product comparators," said Priemer. 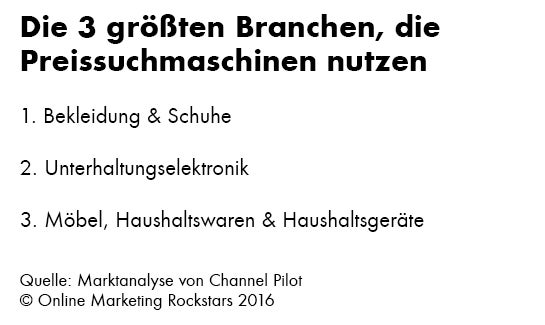 The success of these models has evidently led to the fact that the industry with the highest turnover in price comparisons is no longer consumer electronics. "Product search engines like Ladenzeile, but even Idealo as well as of course the aforementioned Stylight and Stylefruits are technically price comparison services, but are increasingly being used by customers to find products in the giant department store Internet," says Priemer. "This development is increasing and is decisively responsible for the fact that clothing and shoes are now in first place among the sectors that are active in price comparisons." However, entertainment electronics are closely behind the fashion segment, the Channel Pilot's managing director continues.

For traditional providers, there is already another danger on the horizon: “Facebook is currently developing into strong competition for traditional price and product search engines,” says Ralf Priemer. The company is not yet in the top 10 providers - but that could change in a period of one to two years. "For a few months now, more and more of our customers have been promoting their products with Facebook's Product Ads and everyone is extremely satisfied with the results," said the Channel Pilot Managing Director. "Facebook not only offers a huge reach, but also fantastic targeting options."

So it will be more and more difficult for local players to assert themselves against the big US corporations in this area in the future as well. “I believe that Google will continue to steal traffic and sales from traditional providers. Facebook is also becoming more and more of a threat here, ”predicts Priemer. "But I still see a lot of potential for suppliers who focus on lavishly staging products, as Stylight and Stylefruits are currently doing."