How to make flavored popcorn

It crackles and crackles and drives other moviegoers crazy. I don't care, because a movie without sweet, warm popcorn is only half as fun.

The Native Americans already burst the puffed corn. However, popcorn only became really famous as an entertainment snack that was sold at fairs, in variety shows and finally in cinemas - cheap for a few cents per bag, so that everyone could afford the little gourmet luxury. Since then, cinema and popcorn have been so closely linked that for many film fans it is simply part of the experience. The only downer: In this country, nibbling fun is often only available sweet - and now and then salty too. Experiments? Nothing!

For more variety, I have to stand in the kitchen myself and pop popcorn corn. No sooner said than done, and soon the whole kitchen smells of the homemade, fresh snack.

Why does the popcorn corn "pop"?

Only for something special popcorn becomes popcorn when heated. The special thing about the corn kernels: They have a hard shell, under which starch and a relatively high proportion of water lie dormant. The “Butterfly” variety is probably the best known and bursts into typical ramified popcorn flakes. “Mushroom” popcorn tends to be round and compact. Therefore, the variety is particularly suitable to be coated with caramel or chocolate. And so-called "jumbo corn" pops up into particularly large flakes.

All types of popcorn have one thing in common: if they are brought to the right temperature, water vapor forms in the grains, presses against the bowl and exerts a lot of pressure. If the shell finally bursts open, the water vapor escapes suddenly and with a loud "pop". At the same time, the corn starch also shoots out, hardens and transforms disgusting grains into an airy snack.

Which oil do you use best?

Popcorn likes it hot. Only when the grains warm to between 170 and 200 ° C do they turn into crispy popcorn. Therefore, you need popcorn for homemade popcorn Fat or oil with a high smoke point. This includes, for example, coconut fat, clarified butter or refined rapeseed oil. There is even a special popcorn oil with a light butter flavor.

Popcorn from the saucepan

For homemade popcorn, you need a pot with a matching lid, suitable fat and popcorn corn. Of course, the whole thing also works in a tall pan with a lid. A little tip for extra crispy popcorn: If you place the lid slightly offset, the water vapor can escape without the popcorn popping out.

Do you have everything you need
Check off accessories and ingredients or go straight to the recipe.

Did it taste good?
Share this recipe with others or save it for later. 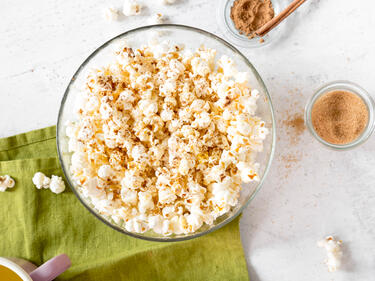 Popcorn tastes good in the microwave too. All you need is a heat-resistant container that you can use in the microwave and cover. It should be able to withstand up to 200 ° C without any problems. Pour in the popcorn with a little oil, approx. 2 minutes at 750 watts Heat up and pour the finished popcorn into a bowl. According to popcorn fans, the whole thing should also work in a simple brown paper bag: Fill in the ingredients, wrap and turn the paper bag several times (otherwise the corn will fly happily through your microwave) and heat as described above.

Give your popcorn a taste

Sweet? Salty? Or with a parmesan and rosemary mix? Pure popcorn is rather tasteless and therefore a great starting point for the wildest combinations of spices. However, you have to prepare or prepare your homemade popcorn accordingly, otherwise salt, sugar and the like will trickle through the flakes and only season the bottom of the bowl.

Prepare the popcorn for the spices

In order for spices to stick, your popcorn needs a few tablespoons of melted butter, coconut fat, or oil as a tasty adhesive. Spread the oil or melted fat thinly and evenly and mix the popcorn thoroughly once so that the flakes are evenly coated but not mushy. Then season to your mood, mix again and nibble on.

Put together a spice mix 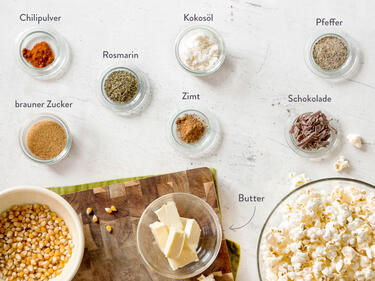 Do you need some seasoning inspiration? If you prefer it hearty, you can combine Salt pepper and rosemary try out. Or miss the snack Chili powder a little fire. The dream team cinnamon and brown sugar ensures your popcorn is sweet. It gets mild, nutty and a bit exotic with 2-3 tablespoons of melted Coconut oil. It becomes American with a few tablespoons of melted butter. And for real chocoholics it is clear: Melted chocolate and crispy popcorn are an unbeatable combination.

You can do a lot with spices, but how does your popcorn taste as caramel, warm and tasty as in the cinema?

In real cinema popcorn, corn, fat and sugar are heated together. The sugar caramelises and forms a fine crust around the individual popcorn flakes. To do this magic trick at home, you give 2-3 tablespoons of fat per 50 grams of corn and 3-4 teaspoons of sugar in the pot. Everything heat together, shake occasionally until the popcorn pops. However, it does take a bit of tact, because the sugar burns in no time at all. So here are a few more tips for cinematic popcorn from your own kitchen:

If that is too tricky for you, you can also invest in special popcorn machines with heating systems and agitators.

How do you store popcorn properly?

Shortly after the first "pop", popcorn tastes crispy and delicious. But woe betide it stands around unnoticed for a whole day, the little puff grains are sticky. To keep the popcorn as fresh as possible, it's best to pack it in one dry, airtight container. Then it cracks too 1-2 days later.

How many calories are in popcorn?

As innocently airy as the nibbling fun is, you can hardly believe it, but 100 grams of sweet popcorn beats me 400 kcal to book. The snack will be a little lower in calories if, for example, you pop the grains in the microwave with just 1-2 tablespoons of oil, do without liquid butter as a topping and season with salt instead of sugar. Doesn't taste good? Only one thing helps: ignore calories and just enjoy.

From sweet to savory - 5 snack recipes for homemade popcorn