For hundreds of thousands of years, stones were the most important materials of our ancestors. Everything changed when humans learned to mine, melt and process metals. This technical progress, which marked the end of the Stone Age, was closely linked to the mastery of fire. The early cultures particularly needed powerful smelting furnaces to remove the valuable metal from the ore.

The so-called Copper Age began around the 6th millennium BC In Mesopotamia and Southeast Europe. It was here that people succeeded in smelting copper ore for the first time. To do this, the charcoal stoves had to reach a temperature of at least 1083 degrees - the melting temperature of copper. People had learned the necessary technique because they had previously used kilns to fire ceramics. For the copper smelting they only had to increase the temperature by another 100 degrees.

People soon made weapons, jewelry and household items out of copper casting or forging. In addition, long-distance copper trading developed. These technical, economic and social changes were an important impetus for the ever faster development of early civilizations. 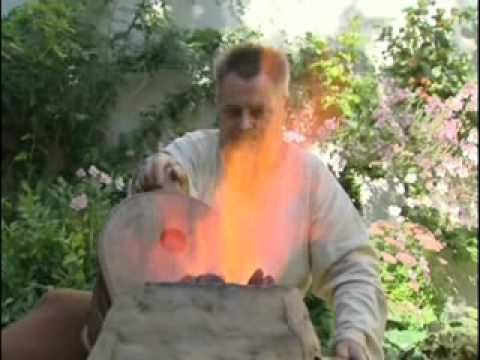 The next - technically and historically enormously important - step was the use of (tin) bronze. This is a so-called alloy, i.e. a mixture of two metals. The first metallurgists, who from 3300 BC In the Middle East who produced bronze, mostly used a mixing ratio of 90 percent copper and 10 percent tin. Since the tin was relatively rare, it had to be traded over long distances and transported to the place of processing.

Bronze had several advantages over the unalloyed copper previously used. Most of all, the metal was clear harder and more corrosion resistant. Bronze swords hardly blunted, were powerful and coveted in the truest sense of the word. The manufacture of the alloy required more know-how, but no increased temperature in the melting furnaces. The melting point of bronze depends on the percentage composition of the alloy, but is below that of pure copper.

Around the year 2200 BC. In BC bronze had also established itself in Central Europe. The Bronze age had started, and with it a tremendous surge in technology and development.

Also the Iron age began in Asia Minor and the Middle East. After the Copper and Bronze Ages, it was the third technological period named after the predominant metal. No later than 1400 BC BC people began to smelt iron for the first time. The Iron Age reached Central Europe around 800 years later.

This new step was associated with an enormous technical challenge. The Melting temperature of iron is at 1535 degrees, which is significantly higher than that of copper. In the initial phase, the metallurgists were therefore only able to produce so-called “lobes”, a preliminary stage of pig iron in which the iron ore did not have to melt. To do this, they used "racing ovens" which, by means of bellows, offered a better oxygen supply and reached over 1200 degrees.

It would take until the European Middle Ages that these old smelting methods were fundamentally improved. Another breakthrough with furnace temperatures of over 1400 degrees followed in the 16th century. The replacement of charcoal with hard coal and the “wind-fresh” technology brought further increases in performance. Iron and steel production became important driving forces of the industrial Revolution. Modern blast furnaces work with coke and in extreme cases can reach temperatures of over 2000 degrees - a real hellfire.

The art of forging is probably as old as metal smelting, namely around 8000 years. This metalworking technique initially prevailed primarily with soft metals such as gold, silver and copper, which could be knocked into sheet metal, for example. As early mythologies suggest, blacksmithing was certainly a respected profession. The Greeks and Romans even had a blacksmith god.

Presumably there was a forge's fire early in history, in which the workpieces could be heated so that forming was easier. Starting at a temperature of 750 degrees, steel can be machined much easier with a hammer and anvil than when it is cold; From 950 degrees, experts speak of "hot forming". In a typical modern village smithy, temperatures of 1250 degrees could even be reached, at which the steel glowed almost white. Today most of the blacksmithing is done industrially. The traditional forge fire is now largely that Art forging Reserved.