Why do Kookaburras laugh out loud 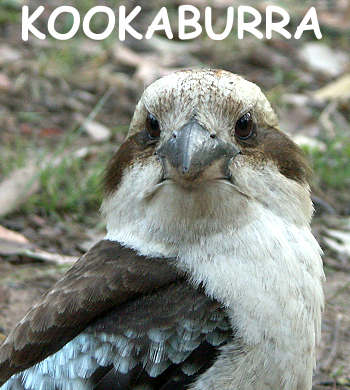 My favorite birds in Australia are these Kookaburras, also briefly Kookys called. I share this preference with most Australians, who like to have the animals close by because they eat tons of annoying insects and poisonous snakes.

Since time immemorial, sunrise and sunset in Australia have been indicated by the loud call of this bird. If you are lying in the camper and a family wakes up in the neighboring tree, then it will be quiet at the latest by 5:00 in the morning. The cheerful alarm clock, with a difference ... :-)

According to a legend of the Aboriginal is the call of the Kookaburra at dawn a sign to "the heavenly people" to kindle the light of the sun, and a signal for all living beings in the bush to start their usual day's work.

His trademark is this peculiar laughter, it echoes through the bush and sounds so amazingly similar to a human outburst of amusement. People of my generation are reminded of the once very popular, mechanical salmon bags. Therefore be Kookaburras also "Laughing Jack", or in German "Lachender Hans", called.

Because of its popularity with the Australians, it even became the mascot of the Olympic Games that took place in Sydney in 2000 Olly brought.

Here is the one Sound of two kookaburras as WAVFile with 130 KB, taken in Cologne Zoo. I've only heard them laugh this once in over 15 months, and luckily I just had the video camera with me ...

In Australia I even managed to capture a usable tone in the wild on my 4th vacation. Wav file will follow here sometime ...

To be threatened Kookaburras mostly by other birds of prey, for protection they instinctively freeze in a posture that makes them almost invisible to view from above. An even worse danger comes from large monitor lizards, which tear open the nests to steal the eggs or to eat the young birds. Although in such an attack all the birds in the group rush together at the predator and try to defend their offspring, it is estimated that only half of the brood survive.

And here is another rare photo. This white albino kookaburra lives in the Healsville Sancturary near Melbourne. He would not survive in the wild, here he has even found a partner to breed with. Isn't it beautiful? 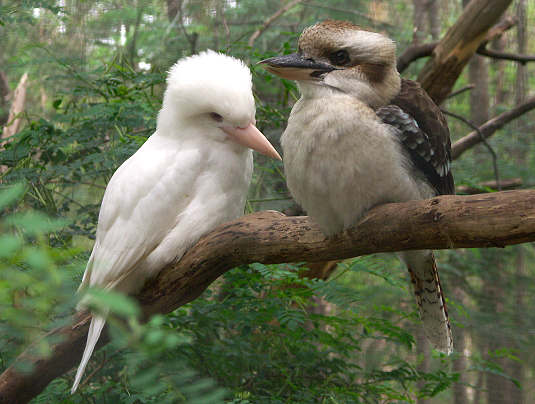 You can tell by looking at them Kookaburras belong to the kingfishers family. Kookys are rather shy birds with a somewhat stocky build, well over 30 cm tall, and one of 11 of the world's 85 kingfisher species (Kingfisher) who are native to Australia. Unlike most of the other members of the kingfisher family, they are not dependent on water, but prefer to live in open forests.

A Kooky has relatively tiny but sharp claws and brown eyes that are surrounded by dark stripes. These stripes soften the effect of the dazzling sunlight. When hunting, the bird grabs its prey with its thick beak and first brings larger animals to safety on a tree stump or stone. Then, with the help of the very strong neck muscles, the hunted property is hit on the stone or branch in order to cut it into pieces that are suitable for beaking. It eats insects and other invertebrates, reptiles, frogs, crabs, fish, snakes, small mammals and even young birds.

You rarely get one during the day Kooky to see, you can only hear their loud laughter in the forest in the tops of the giant Mountain Ash. The species widespread in northern Australia, the blue-winged kookaburra in my picture, does not laugh as loudly and intensely as its relatives in the south, the Laughing kookaburras. He cackles rather quietly to himself.

In the late afternoon the birds go down to their prey. Then they prefer to lurk on the lowest branches of trees that stand alone or are on the edge of the forest or road. From there they have a good view of the ground, where nothing crawling or crawling will escape them.

Where the animals are used to people, you can even get very close to them. In Hall's gap let us have a beautiful specimen almost up to arm's length during an evening stroll. In the twilight it was sitting on a branch just 2.5 m above the ground, directly on a side street. The two photos around this chapter were taken on the campsite of Fitzroy Crossing in the Northern Territory and show a blue-winged kooky. The other photos were taken in the Yarras near Melbourne, the last one shows a particularly trusting copy. 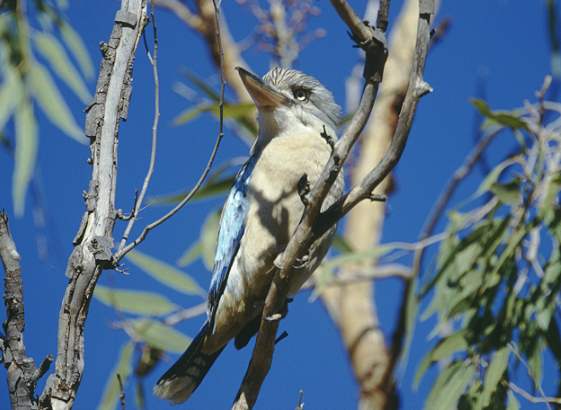 The Kookaburras live in larger family groups, in which each new generation is raised by parents and older siblings together. This babysitting together increases the chances of getting enough food for the boys together. Kingfishers usually choose a mate once for the rest of their life, and the community can last for over twenty years 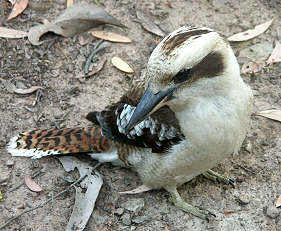 In the annual courtship, the male feeds his chosen female to demonstrate his ability to hunt and share - after all, the young should also be fed - and to encourage the laying of eggs. Under careful observation by the female, the male digs a nest hole with his powerful beak. Preference is given to caves in dead trees, and sometimes nests are even dug in abandoned termite mounds. Then at the end there is a demonstration and acceptance of the nest, the whole thing takes about five weeks.

In late spring, the female then lays eggs in the prepared cavity. They are alternately incubated by both parents and even other group members over the next four weeks. The newborns are naked and blind, but quickly get their first feathers and after about five weeks they look almost like the big ones. They only have a smaller beak and very short tail feathers. They wear this first plumage for about a year. As soon as they can fly, the little ones, accompanied by their parents and siblings, leave the nest and never return there. Presumably it protects against predators if the same nest location is never used again. 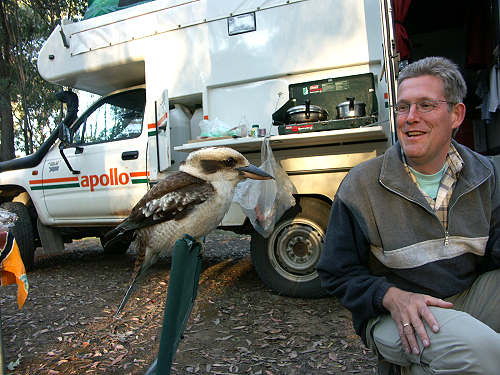 Video on the subject