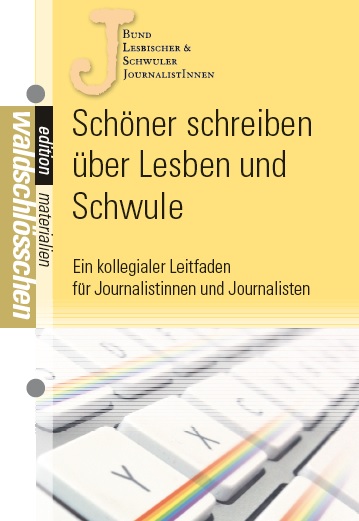 When lesbians and gays read articles about themselves in the newspaper or watch them on television, they are sometimes amazed. Regardless of whether the tabloids, quality press or news agencies: There are regular headlines about the "homosexual milieu" and awkward formulations such as "homosexuals and lesbians" or "confessing gays", which show that many editorial offices are not as relaxed as some accepts.

In 2011 the Association of Lesbian and Gay Journalists published a leaflet on this topic with eight practical examples. In cooperation with the Waldschlösschen Academy, a much more extensive version is now being produced, which, in addition to practical examples, also contains short texts for classifying formulations and a small glossary. With this new edition we want to continue to encourage our colleagues: Write about lesbians and gays - but also think about the impact of your texts! The following information should be a little help in everyday work.

The brochure is in the Edition materials Waldschlösschen and is also available in its original version as a PDF file.
In our online list on this page, some articles have already been updated or will be updated shortly.

Surprisingly often, “homosexual” is equated with “gay”. The gender-neutral word "homosexual" is the umbrella term for gays and lesbians.

Anne is an avowed homosexual

You confess to a crime, a sin or a belief. Homosexuality is none of this, the days of § 175 StGB are over. Even if the word confession has been expanded in common parlance (including "confessing football fan"), it remains an unsuitable term. Regardless of this, it is still relevant when someone has come out confidently. Important: If people are openly gay or lesbian, the media presentation of this information is not indiscreet! If homosexuals do not identify themselves, they are automatically mistaken for straight.

Suggestion: "Anne lives openly as a lesbian". Even better: casually mention as with heterosexuals: "Anne's partner is ...", "Anne has not yet found her dream woman ..."

Moritz had his outing

This term has also gone through various expansions of meaning: Nowadays you can also Outen yourself as a vegetarian. When it comes to lesbians and gays, however, there are subtle differences, even if the terms coming out and outing are often used as synonyms. Coming-out describes a personal, self-determined process: someone informs his relatives, his environment (or the public) about his sexual orientation. On the other hand, one speaks of “outing” when a stranger makes a person's sexual orientation public. An essential difference for the person concerned.

Correct: "Hape Kerkeling and Alfred Biolek were outed by Rosa von Praunheim."; "Klaus Wowereit had his public coming-out at the SPD party conference."

Moritz has come out

In the reflexive form, the verb is correct because it expresses self-determination.

The adjectives “gay” and “lesbian” are seen as dirty words by some heterosexuals. Gays and lesbians, on the other hand, see these words as a natural description of their sexual identity. So take courage.

Double discrimination against lesbians. The formulation contains the image of the sexually passive woman who can only find her sexuality through a man. The overarching question of whether a lesbian has ever tried a man (who could "convert" her) is still commonplace. In some cases these words are used for women who have never had a sexual relationship or encounter with a man and who rule it out. The formulation implies a reversibility of sexual orientation through external influence. Many lesbians find this term an insult.

Suggestion: lesbian. "Anna has always been a lesbian." Or "Anna, who was married to a man for ten years, came out as a lesbian when she was 40."

In the homosexual milieu

This term is linguistic nonsense. What or where should this milieu be: the city of Cologne, the Eurovision Song Contest or even the office of a lesbian politician? Such phrases collectively denigrate homosexuals, as if lesbians and gays were organized like criminals in some sort of red light district. Hardly anyone would report an “act of violence in the teaching environment” or a “double murder in a hetero environment”. We know that “milieu” is also a sociological term. But authors hardly want to express sociological precision with sensational headlines of this kind. In addition, it is precisely a result of these studies that homosexuals occur in every milieu.

The word "homo" as a synonym for a gay man, rarely for a lesbian woman, sounds disrespectful. As a prefix, the word Homo can under certain circumstances clarify the facts briefly and concisely (see further text examples)

For a long time, there has been an emotional debate about the equality of (same-sex) civil partnerships with (heterosexual) marriage. Up until the opening of marriage on October 1, 2017, many lesbians and gays spoke very deliberately of “wedding”, called their partners “man” and “woman” and thereby formulated their right to equal treatment. At that time, however, the use of classic terms of marriage suggested equality that did not exist. As long as there was a distinction between marriage and civil partnership, it was journalistically correct to make this discrimination clear by using the words used in the registry office.

For many years there have been different opinions about the admissibility of the striking term "gay marriage". On the one hand, the prefix “Homo” can be understood as degrading (see practical example Homo, Homo-). On the other hand, the civil partnership that was in place until 2017 was not a marriage.
Since October 1, 2017, marriage has also been possible for homosexuals. This makes the term gay marriage superfluous.

Vocabulary with a discriminatory undertone. The terms “suspicion” and “accusation” have a clearly negative connotation: as if homosexuality were a crime, an illness or something that had to be kept secret.

At Christopher Street Day, among other things, the diversity of the community is shown, which should be taken into account journalistically. The term “gay parade” is a formulation that discriminates against all other participants. The neglect of lesbians, transsexuals and transgender people in the picture reporting or in the article text is a common mistake in reports about CSDs. Certainly some demonstrators stand out from the crowd; To limit the reporting to these, however, does not do justice to the character of the event.

Despite the loud music and the exuberant atmosphere, it should not be forgotten that many people take to the streets at the parades on the occasion of Christopher Street Day to demonstrate for equality and against homophobia. The fact that goals that have already been achieved are also celebrated does not detract from this.

Suggestion: respond to the political demands.

Press release on the guide

Tip: Glossary of the "different and same" campaign

Trans * expert on language: "Thinking in the genital grid"

Six tips for journalists who want to report on a CSD

Seven clichés that bisexuals no longer want to hear

similar projects on other subject areas

AntiDiscrimination Office Cologne of the Association for the Public Against Violence (PDF, 544 kB)

Formulation aids for reporting in the country of immigration

Report on people with disabilities

Leidmedien.de is a website for journalists who report on people with disabilities.

Inter * & language - from »innate« to »hermaphrodite«

Trans * at work: first breaking a taboo, now of course?

A reader about transgendering as a topic in the working world of
State Office for Equal Treatment - Against Discrimination at the Berliner Senate Department for Labor, Integration and Women (PDF, 60 pages, 1.2 MB)