What makes Svalbard so unique

General information about our Svalbard tours 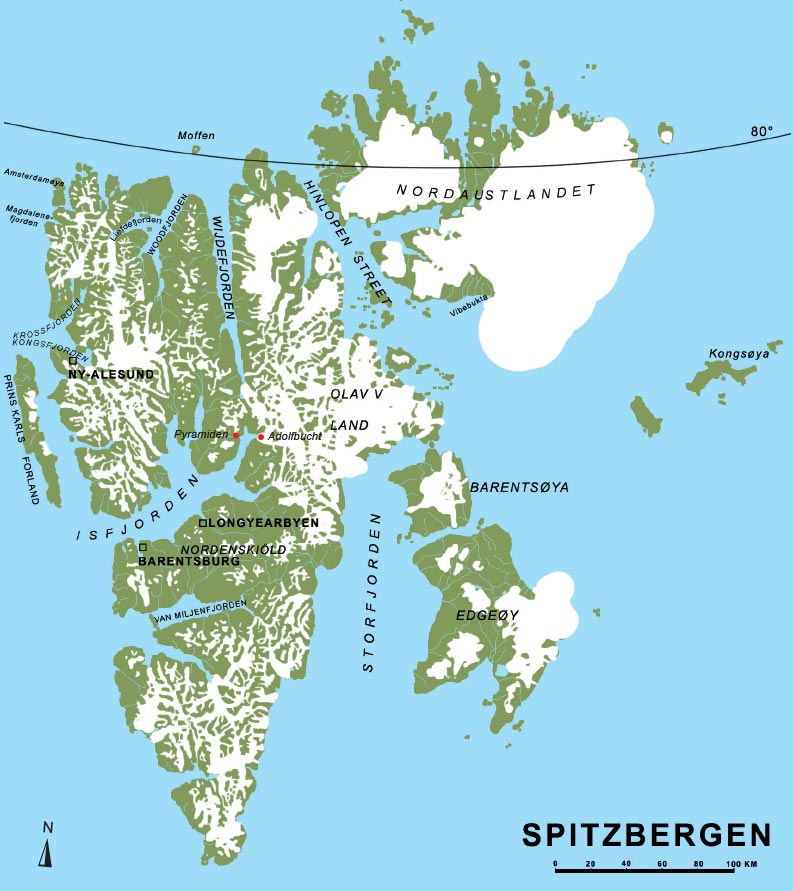 The Svalbard archipelago with its approx. 61,000 km² lies between 74 ° - 81 ° North and 10 ° - 35 ° East. The largest islands are Spitsbergen, Nordaustlandet, Barentsøya, Edgeøya and Prins Karls Forland. The archipelago is administered from Norway on the basis of the Svalbard Treaty. There are several smaller places on Svalbard and the largest place is the Norwegian "capital" Longyearbyen with about 2000 inhabitants. Ny-Ålesund, an international research center, has around 50-100 residents (depending on the time of year). Barentsburg is the headquarters of Russian mining activities and has a population of around 500. There are no road connections between the individual settlements.

After the polar explorer Willem Barentsz discovered Svalbard in 1596, whaling was practiced here by many nations. During the winter months, Russian and Norwegian hunters and trappers lived on Svalbard in the 18th and early 19th centuries. In 1906 the American John M. Longyear built the first mine and gave the place Longyearbyen its name. In 1916, Store Norske Spitsbergen took over the mining operations in Longyearbyen. Almost 40 countries signed the Svalbard Treaty in 1920 and Norway received sovereignty in 1925. In 2002, an extended municipal self-government for Longyearbyen was introduced according to its own model, adapted to the local conditions. Responsibility for communal services and administrative tasks was thus transferred from the state to the elected local administration. The small, colorful community of Longyearbyen has developed from a typical mining society to a place with a diverse economy and a range of cultural, activity and service offers.

Longyearbyen has a young population, today there are kindergartens and a school with all levels up to high school. In addition, subjects such as arctic biology, geology, geophysics and technology can be studied at the University Center on Svalbard. Hut tours and outdoor activities are popular with the locals. Since there are no paths between Svalbard's settlements, snowmobiles and boats are often used to get around. Research and tourism attract people from many countries, and the local population in Longyearbyen includes around 40 nationalities.The polar night and midnight sun duration varies depending on latitude, and Longyearbyen has the midnight sun from April 19 to August 22 From October 28th to February 14th the sun does not rise above the horizon in Longyearbyen and the polar night lasts from November 14th to January 29th.

In unison with the return of light, the activities grow - March to May are exciting months, the days are getting longer and from the end of April the midnight sun shines while the landscape is still wrapped in winter clothes. The migratory birds return and the rock faces and cliffs fill with busy life as seals soak up the sun's rays on the sea ice. The Arctic summer is short and hectic. Despite the permanent daylight, one has the impression that the days are not long enough to see everything.

The landscape dresses up in autumn and orange tones fill the valleys while the ground slowly freezes again. The temperatures drop to around 0 ° Celsius. The days are getting shorter, and on a fine morning you wake up and fresh snow has covered the mountain peaks with sugar. A hike at this time of year gives lasting impressions. The frozen ground is easy to walk on, the air is crystal clear and the orange-red evening sun ends a beautiful autumn day in the high Arctic. At the end of October the sun throws its last rays of the year onto the landscape, for more than two months it is now dark night all day. On winter days with good weather, full moon, starry skies and dancing northern lights, you can still experience the wonderful light that makes the polar night so unique. In February, perhaps the most beautiful month of the year, night gives way and day by day it gets longer and longer.

Despite the northern location, the archipelago has a relatively mild climate compared to other regions at the same latitude. In Longyearbyen the average temperature varies between -14 ° C in winter and + 6 ° C in summer. In winter, longer periods with temperatures between -20 to -30 degrees are not uncommon. There can often be periods of fog in summer. The annual precipitation on Svalbard is mostly only 200-300 mm. The weather in Svalbard can change very quickly and vary greatly from one location to another.

About 60% of the area of ​​Svalbard is taken up by a multitude of small and large glaciers. Only 6 - 7% of the area is covered with vegetation. The most fertile areas are found in the inner fjord areas of Svalbard. In Svalbard there is permafrost, so that only the surface of the ground thaws in summer. The flora is characterized by a short growth period, with little rainfall and nutrient-poor soil. Nevertheless, there is a large number of arctic plants in Svalbard, over 100 species are registered around Longyearbyen alone. In total, there are around 170 plant species on Svalbard. The flora is extremely sensitive; if the vegetation cover is damaged, it can cause permanent traces. That is why the entire vegetation is under nature protection.

The Barents Sea forms the foodstuff for most of Svalbard's animal species. Here you will find the largest bird cliffs in the North Atlantic with millions of pairs of the most common breeding bird species - guillemots, kittiwakes and fulmar. In the large valleys there are large populations of geese and waders and eiders breed across the entire archipelago. Most of Svalbard's birds are migratory or grazing birds that overwinter along the Norwegian coast or on the continent. The Svalbard ptarmigan is the only species of bird that does not migrate from the archipelago in winter. The Svalbard reindeer and the arctic fox are the only land mammals that are native to Svalbard. Around Svalbard there are ringed seals, bearded seals, common seals, walruses and occasionally whales. The polar bear is mostly found on the eastern islands of the archipelago, but individual animals can be found anywhere in Svalbard. They get their cubs in snow caves on land and the cubs stay with the mother until they are around 2 years old. It is forbidden to disturb, catch or kill animals. All birds are protected in the breeding season, eggs and nesting sites are also protected.

Our trips to Arctic and Antarctic regions are generally not suitable for people with physical limitations. However, depending on the restriction, a trip may still be possible. If you have limited mobility, please talk to us whether we can tailor your travel request to meet your needs. We would be happy to advise you on this!