How does a short circuit affect us?

In the following we would like to deal with the electrical short circuit. In order to be able to understand this, however, it is very important that you already know some basic electrical engineering terms. If the following topics don't mean anything to you, please read them first:

As a reminder: A voltage source - for example a battery - has a plus pole and a minus pole. If you connect these two poles directly with each other, i.e. without a consumer or energy converter in between, a short circuit occurs. In the event of a short circuit, a lot of current flows, which can lead to excessive heating and thus to the destruction of the system. In the news you hear again and again that an electrical short circuit has led to a (house) fire.

The current always tries to take the path of least resistance. The following graphic shows a circuit in which the current should actually flow through the lamp. However, a short circuit is caused by a second line, which causes a direct current flow between the poles of the voltage source (shown in red). 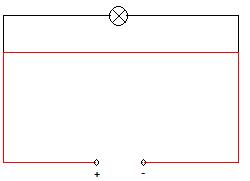 Basically, of course, you should avoid short circuits. In practice, however, short circuits happen again and again. For this reason, it makes sense to use so-called backups. Here is a brief introduction to two types of backups: