Why do cats scratch wallpaper 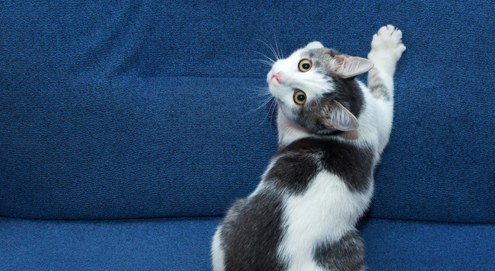 When cats shaft their claws on the scratching post, they remove the outermost layer of the nails, under which new, sharp claw tips appear. In addition, cats mark by grinding their claws, because this is where they distribute scents. The scratching behavior can usually be observed in the home, but can also occur outside the known territory.

Does your cat scratch the couch or other furniture?

If cats show a strong scratching behavior, this can indicate stress, anxiety, or insecurity. The increased scratching usually has nothing to do with caring for the claws. Rather, it can be a question of marking behavior. Because in order to mark their territory to other cats, the animals scratch visible places - often near their resting or sleeping place. This can affect the couch, chairs, table or other furniture. The carpet and wallpaper are also often scratched. It can also happen that the cat no longer uses its scratching post itself, but keeps sharpening its claws on the furniture to mark the territory. This behavior is a warning sign that the animal is feeling insecure and therefore constantly feels the need to redefine its area. The problems primarily arise when several cats live together in the apartment or there are major changes in the animals' environment, for example after moving or during a renovation or when visiting craftsmen. Outdoor cats can also be affected if they have conflicts with other outdoor cats or feel harassed by them. In response to the tension, the animal scratches the window or door frame.

Don't punish your cat for scratching furniture. This behavior is natural and if you punish your animal for it, it will become even more unsafe and the undesirable behavior will intensify.

If you notice your animal's excessive scratching behavior, then you should try to find out the real reason for this behavior in order to reduce the stress on the animal by making some adjustments. Place a scratching post where the cat scratches the most to provide an alternative. In the same way, you can make the usual scratching post more attractive for your animal, for example with catnip - the Catnip Spray is ideal for this. In a household with several cats, you should create several scratching opportunities so that there is no competition for the scratching post and stress between the animals is avoided. In addition, Feliway Spray can reduce unwanted scratching. Feliway can be sprayed on any surface the cat scratches to give the animal a sense of security and calm. This disappears the urge to mark the territory again and again.

Do you have any questions about your cat's unwanted scratching behavior? Please contact our vet by e-mail to [email protected]