How to get machinima 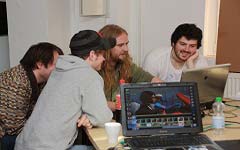 preparation
The preparation for a game film festival initially focuses on the target group to be reached. Above all, the age, the homogeneity and the potential previous experience of the participants with regard to the handling of programs and games are to be questioned. Once this has been clarified, the tools to be used can be prepared. Most of the preparation time is therefore invested in dealing with the games and their possibilities in the workshop. In addition to licensing issues and age ratings, the basic criteria for creating machinima must be scrutinized. It quickly becomes clear that there are at least three ways to create machinimas.

The first and friendliest variant for beginners is to use games that offer built-in machine functions. Examples include The Sims 3 (USK6), The Movies (USK12), but also GTA 4 (USK18). All games are considered to be 'All in One' tools, which include all the necessary steps in the game, from video recording to editing with timeline and Co. to rendering. The next category would be to use games that do not have an internal recording or editing function. Actually, all games can be used here that, with their genre and presentation, offer the framework necessary for the story to be implemented. However, you should pay attention to certain requirements that the first-mentioned game category already entails. These include:

The game scenes are then recorded with external programs such as Fraps and assembled in external editing programs.

The third and last category represents the most original possibility of machine creation, in which the program code of a game is interfered with. Here, games are used that have so-called software development kits, that is, they offer the possibility of making programming interventions. The latter approach can hardly be implemented in media pedagogical contexts, since the technical aspects dominate over the content-related and process-oriented focuses.

Once the games have been found, short presentations are created to illustrate to the participants the possibilities, challenges and limitations. For this, depending on the capacities, different game managers should be named in the implementation, who are responsible for testing the games, creating the presentation and for supervising the workshop. Furthermore, two presentations on the subject of machinima will be created. The first presentation should bring the participants closer to the intention, the methodology and the basic possibilities of the medium. The second is intended for the (purely receptive) machinima short film night planned as part of the festival and, with selected international machinimas, is also intended to address an audience that is close to the topic of film, but for whom the connection between the two media film and Game is new.

execution
The classic sequence of a game film festival is based on four program items:

The participants will be confronted with the subject of machinima and the games that can be used in the festival through appropriate presentations. Then the first stories are developed or ideas that have been brought along are questioned for feasibility. The participants are made familiar with the available hardware and software in small groups and begin to implement their story individually or in a team. On the evening of the second day it breaks
the short film night deliberately takes up the “normal” workshop routine, with visitors from outside receiving the films on the one hand, and there is also the opportunity to look over the shoulders of the machinima creators and ask questions. At the end of the festival, the machinimas created will be premiered and discussed.

Closing, preparation or presentation
The presentation of the machinimas created is offered as an open event. The participants present their films and are available for questions and discussions. In addition, the workshop itself is evaluated. Since the creation of the machinimas takes place on a purely digital level in the entire process, nothing stands in the way of the publication and dissemination of the results on online (video) platforms.

As a variant of the festival shown, pure machinima workshops come into question, which are primarily limited to telling stories using computer games. You can still orientate yourself on the processes already described, whereby, especially in the case of short project periods, the priorities between narrative possibilities and technical challenges have to be weighed. In a four-hour workshop, it is more the method itself that can be taught in rudiments. Accordingly, we have mainly worked with multipliers and games from the first category of machinimas shown here. That means, based on a short input on the topic, the first steps and small scenes in the game could be created and published. However, this type of workshop rarely goes beyond a work sample. The main aim here is to arouse interest and show the possibilities.

In contrast to this, there are workshops that are more open in terms of content and time (e.g. project weeks), which are more dedicated to the actual history and / or reflection of the computer game medium. Another component that comes into play here is the possibility of networked and thus collaborative work on products. Multiplayer games allow, for example, several camera perspectives and you can act with several protagonists at the same time, which on the one hand expands the creative possibilities and on the other hand encourages teamwork.

The game film festival in particular and machinima workshops in general offer the opportunity to experience computer games as a cultural asset in a new setting. Based on a gaming culture and the creation of 'user generated content', the project offers gamers the opportunity to create conscious and new access to their medium, which, embedded in the relevant contexts, allows new perspectives on the medium and its content. For multipliers, access via such a workshop reduces fear of contact and enables them to experience the medium from an action-oriented perspective.

The most intense moments arise when a topic has been agreed and we work on it together in a team. In particular, the possibility of being able to work on almost any contemporary and current topic creates undreamt-of experience and work spaces. In addition, several participants with the same game can also have the same content and can thus produce and coordinate different scenes with the same actors at the same time. If network games are used, you can work with several cameras, perspectives and actors similar to a "normal" shoot, which requires intensive preparation and discipline during the shoot, just like with "real" films.

The difficulties mostly relate to two components: the story finding and the technology - and excitingly enough, both are often causally related.

Let's assume two ways of implementing a story using machinima: While some participants already come to the workshop with an idea, others want to be inspired by the tools. Both mostly collide with the given possibilities. With a solid idea in mind you often fail in the search for a game that fulfills all the wishes in the story implementation, because not every required animation, not every intended location and not every presented prop can be present in the game.

On the other hand, the variety of possibilities, but also the recognizable limits of the games and tools, can quickly become overwhelming, and the brainstorming process turns into a “I'll test the possibilities first”. Usually there is no time to knit an adequate story. In addition to the content-related problems, it is often the tools used that can tip a workshop. If, for example, the game crashes again during the 15th recording and nothing is saved, even the most enthusiastic participant will lose interest. Here it depends on the intensive preparation, which often has to be supplemented on site by a good portion of improvisational talent. Finally, you should always keep an eye on the content used. While in Germany the use of games within machinima projects (currently) has not yet led to any legal discussions, the unreflective use of, for example, GEMA-subject music titles is often punished shortly after uploading.

Despite the potential problems described, all workshop participants have so far been enthusiastic about the possibilities that come with creating machinima. Above all, creative teachers were given link lists and installation tips after the workshops in order to tackle a machinima project with their students.

But youth film groups also took inspiration with them, for example to carry out an animated test shoot using machinima before filming with real locations and real actors. The different possibilities of machinima creation were particularly praised. Here everyone, whether gamers, non-gamers or even experienced video artists, could gather experiences and try them out according to their own interests and possibilities. What most of the participants lacked was almost always time. Whenever the tools were safely mastered, the story changed due to the recognized possibilities and ultimately clearly formed, the festival days or the workshop time were over. In the end, however, everyone had one product.

In order to balance the relationship between learning the technique and writing a story, brief preparatory inputs could and should take place with the groups involved in the further development of such projects. The possibilities and limits of the games and tools should be presented here and, based on this, the stories could already be sketched in advance, so that the pure machinima creation (like the real shooting and editing in a classic video project) can be based on the implementation of the Focused on the script. 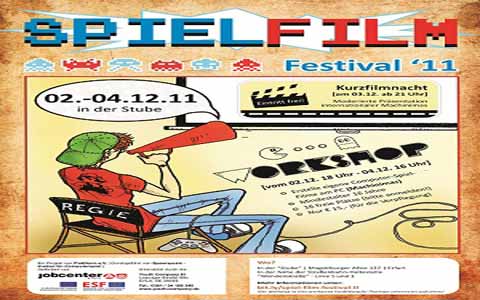 The Institute for Computer Games - Spawnpoint deals holistically with the medium of computer games in the emancipatory tradition of media education. The aim is to encourage people to use computer games in a thoughtful manner. The institute legitimizes computer games as an important leisure factor, as a means of communication and interaction, as a cultural and sports area, and as a methodological means.
In particular, the focus of the institute's work is on contact with the player community.

Gerrit Neundorf studied social pedagogy in Leipzig and Darmstadt, where he was led by Prof. Dr. Franz Josef Röll was infected with media education. Since 2007 he has been one of the directors of the Institute for Computer Games - Spawnpoint. For the state of Thuringia he has been working as a youth protection expert for the entertainment software self-control (USK) since 2011.