What would Jesus think of your life?

What if Jesus were at the door tomorrow?

What if God heard our prayer, “Your kingdom come,” and actually did come? Not sometime, but these days? As a big Advent surprise?

You are lucky that you are reading these lines! Not for the content, but solely because you are obviously still alive. Because the world was supposed to end eleven weeks ago. More precisely: on September 23rd. On that day, some “experts” found out, the mysterious planet Nibiru would drill its way into the globe. That would probably not only have caused a lot of noise and a lot of dust, but simply put an end to our home planet. End of story, nothing to add.

In the end it turned out that there is no such thing as “Nibiru”, NASA spoke of “nonsense” in a rather unscientific manner - and the earth kept turning. Earlier predictions, according to which the end of the world was scheduled for December 21, 2012, did not change anything - because then the Mayan calendar supposedly ended.

What is it today? 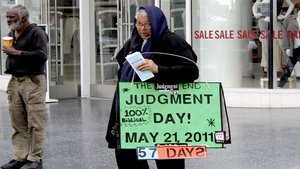 Hurray, we're still alive! This lady warned in Los Angeles in 2011 that there were 57 days until Judgment Day - “100 percent biblical!” | Photo: Markus Nolte

An American radio preacher, who was also a civil engineer, announced the end of everything for May 21, 2011, October 21, 2011 at the latest. So he had calculated it from various figures in the Bible. The result: Many of his followers donated their fortunes to this man named Harold Camping, broke up their tents, terminated rental and employment contracts, and left their partners. Mister Camping had a serious problem by October 22, 2011 at the latest, suffered a stroke and announced the end - this time of his prediction of disaster.

But what if it really is that time? If maybe not the end of the world, but at least Jesus was at the door: "Hello, I'm back, you had prayed for it almost every day?" Then the Lord's Prayer may be remembered: "Your kingdom come", but also rub your eyes vigorously and think: What then, today? Very bad!

No date given for the last judgment

Presumably Jesus won't go door to door and ring the doorbell when he returns. But that he comes back - that is the essence of Advent. Not just the cozy memory of the sweet Jesus boy back then in the manger. Not just - more seriously, now - the Incarnation of God at the gates of Bethlehem. But also that he “will come to judge the living and the dead”. So it is in the Creed.

However, without giving a date. It doesn't seem to be that far yet. But it all started a long time ago. As they say, we live between “already” and “not yet”. The kingdom of God has dawned long ago.

But he also warns of the panic fear that “everything, including the comprehensive reconciliation of reality, can and will be produced by oneself”. Instead, Kehl quotes a prayer from Cardinal Roger Etchegaray: “Teach me to look forward and not regard yesterday as the future. Teach me to create new things with you every day and not to pick the withered flowers on the beaten path. ”And then come what may. God commanded!