Can I go to RMG now 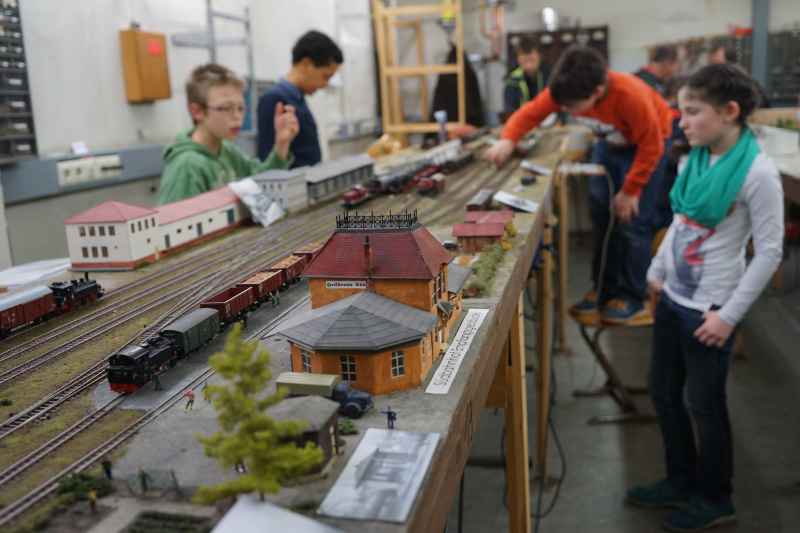 We don't learn for school: the students at the “RMG” deal with the topic of railways in a professional manner

"Another half a car length", "Stop in front of the stool pit" - such commands, which once belonged to the acoustic accompaniment of the day-to-day business of the railway workers at the Heilbronn Südbahnhof, can be heard today in children's voices, but in a very serious tone, namely in Robert's basement -Mayer-Gymnasiums (RMG) in Heilbronn. There you can find the replicas of the two railway stations Heilbronn Süd and Heilbronn-Sontheim, although in the size HO (and HOe), but at the same time in the converted original dimensions. That means nothing less than that a station system like that of the Sontheimer Bahnhof, which in real terms was 500 meters in length, is still around six meters long in the scale model - and thus literally the scale of the common field-forest-meadow model railroader blows up, because he usually doesn't have a gym as a hobby room.

In the "RMG" it is a little different, there the two stations south and Sontheim as well as the section around the massive modern bridge over the Sontheimer Landwehr are almost completely built up and, so to speak, wound into a room with arches arranged in between: Because they are not one behind the other can, they are set up in parallel, in the form of a large S. If there is an “operating day”, schoolchildren of different age groups are more or less enthusiastic about the matter. And it is obvious that dealing with model railways calls for and addresses thinking in terms of schemes, advance planning, logistics, adherence to rules, insertion into a hierarchy, but also coordinated interaction with one another and ultimately creative work: things that one can certainly also be of good use in “real” life.

Fascinating about the layout is not only the unusual generosity of the track layout, which of course fully corresponds to the former reality. There are also the station buildings and storage sheds, which are exactly copied from the original, with a hint of the surrounding residential buildings. “Prototype” is good: The buildings no longer exist, so the school complex now also forms a kind of three-dimensional mini-museum with two distinctive “corners” from the earlier cityscape of Heilbronn. It is a matter of honor that prototypical trains meet on the Gleisharfen, exactly of the type and types that once romped around in the south of Heilbronn on normal and narrow gauge, up to the long commuter train of the Bottwartalbahn.

It is thanks to Helmuth Etzler that all of this came about. The physics teacher at the RMG at the time considered establishing a model railway working group in the 1980s so that students and teachers could do a relaxed type of project work outside of the lessons and class assignment. "Do something with the Bottwartalbahn," advised a colleague casually. That said nothing to Etzler: The educator who had moved from Heidelberg had lived in Sontheim for years, even within sight of the remaining route at the time - but that hadn't interested him in any way until then. Helmuth Etzler licked blood, got into the subject with his own thoroughness (what would a physicist be without her) and blossomed into an expert - not only when it comes to the Bottwarbahn, but also for the more than delicate work with tiny locomotive models that you can can only be bought as expensive high-precision kits and have to assemble them yourself.

Initially, however, the model train stations were built step by step: some of the students turned out to be hobby carpenters to create the base plates, others took care of the implementation of the buildings, from the dimension sheet taken outside to the more than real-looking model made of cardboard and plaster, authentically colored with all traces of weathering. Others took care of the details, planted “bean tendrils” made of wire and foam or populated the train stations with mini “men”. Even today, around thirty years later, Etzler is proud of the community spirit that the special achievement brought about: “After all, you can't buy such models anywhere.” Etzler himself lend a hand for the complicated track systems: “If it doesn't work perfectly, comes soon no more. ”The tinkerer and quality assurer in the physics teacher was right: The switches, well maintained by“ route keeper ”Etzler, still work flawlessly today, and the students -“ unfortunately no longer mine ”, as the now retired educational mediator regrets, are coming still happy.

When all the modules in their most extensive expansion stage were around 35 meters long, fire protection forced the system to no longer be installed in the basement in the 2000s. With a heavy heart, Etzler and Getreue had to process more than half of the plant components into kindling, including the striking branch to the former sugar factory. Today, the remaining 15 meters are permanently set up and operable in a basement room. The fact that the large system, whose construction alone required teachers and crew for three hours each year, bent around a corner of the basement corridor, even had a curious and instructive consequence for the "Railway Operations Service": Helmuth Etzler had to - as in real life - a Set up a “business” telephone system so that train traffic could be organized, “because the boys at the two large train stations couldn't see each other like that.” The advantage of this facility, as Etzler remembers with a smile: “They had to learn right away how to communicate quickly and sensibly. "

Something else has changed over the years, however: "Today you would not be able to manage such a community facility with the classes", as Etzler states: The stamina for such a project that will not be finished in four weeks and not in four months can hardly be expected from young people today. Especially since the model railroad is considered exotic today and the railroad is hardly a professional goal any more. In addition, the parents of the pupils have of course long since lost their knowledge of the term Bottwartalbahn. But Etzler was eagerly watching a new phenomenon: For the first time, he placed historical photos on the rail modules, taken precisely at the points that can be seen there in the model. And the result: "The boys look at the pictures and say: Oops, that really was the case." Even the fact that the pictures are black and white automatically indicate that it is not something everyday, but something that is past: "That acts like a signal. ”With that, a new dimension begins to work for one or the other - that of the tangible story. The retired teacher Helmuth Etzler mischievously still plants spiritual currents that are transferred to young students - actually no wonder at the "RMG", whose namesake Robert Mayer formulated the natural law of the conservation of energy. -upf

Heilbronn | Robert Mayer High School | Open house at the RMG
Bismarckstrasse 10 | 74072 Heilbronn | Room 015 (basement)
Presentation of the modules Heilbronn Süd, HN-Sontheim and Sontheimer Landwehr
Built in the 1980s by students of the RMG under teacher Helmuth Etzler
Info sheet (Pdf file) | Accessible once a year on the open day at the RMG