What are the examples of dynamic forces

When handling a forklift, the forklift driver must be aware of the dynamic forces that act on him, his vehicle and the load being transported. These forces, also known as thrust or horizontal forces, must be kept as low as possible during all activities or controlled by suitable measures such as load securing.

In the following, we will present the dynamic forces to you in more detail and explain the consequences that result for a forklift driver in practice. We cannot spare you a few simple formulas, as they are important for a fundamental understanding of the forces.

Every time the truck moves, the driver, device and load experience a speed. In the case of a uniform movement (i.e. with a speed that has not changed over time), the forklift covers a certain distance that increases proportionally to the time passed. The speed v then corresponds to the factor from the distance covered s and the time t:

If the truck drives off from a standstill, it must be accelerated. The speed v is not stable here, but increases over time until the maximum speed is reached. Acceleration is given in m / sec² and therefore always relates to a certain period of time. For example, a forklift can accelerate from 0 to 10 km / h in 8 seconds, according to the law of speed and time (v = a * t).

The acceleration can be shown graphically in a speed-time diagram:

The following applies: the faster the vehicle is supposed to increase its speed, the more powerful the engine has to be. Conversely, however, this also means that the braking force must increase to the same extent in order to be able to brake the truck from full speed (which corresponds to a negative acceleration, since the speed is reduced within a certain time or even reduced to zero when the truck comes to a standstill. 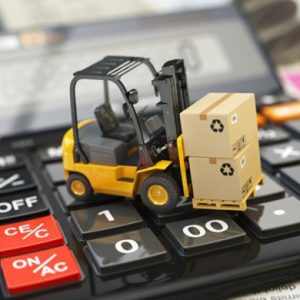 In order to set a body in motion, a certain force has to be applied, also when braking. Since every body, regardless of its shape or composition, strives to remain in its state of rest or (in the case of a body in motion that is to be braked) in a uniform movement (this is the 1st basic law of mechanics , Isaac Newton's theorem of inertia), every time a force is applied, an opposing force acts on the body, which must be overcome. This inertial force can also be felt directly when strong forces act on the human body, for example when accelerating a high-powered car or when taking off an airplane. It ensures that the body is pushed into the seat until a steady speed is reached.

The formula for calculating the inertial force is T = m * a, where m stands for the mass of the body on which the force acts. That is why the weight of the moving body also plays an important role in how strong the inertia force T acts, as does the acceleration a. The faster a vehicle is and the more mass it has, the stronger the inertial force. It can also be felt during strong, jerky braking: the truck brakes sharply, but the forward force continues to act on the driver and the load: the load slips, the driver is restrained by the seat belt (or his health is endangered if he) was not buckled up). And all the more so, the faster and / or heavier the truck is with a load. An existing seat belt must therefore always be put on before the truck is set in motion. This is the only way to protect the driver in the event of an accident.

The force of inertia must also be taken into account when transporting loads: When the lifting mast is aligned vertically, the forces of inertia cause the load to slide forward during a sharp braking maneuver, while with a mast tilted backwards, the forks pointing upwards at an angle absorb all or part of the force of inertia.

The force of inertia also acts when driving over potholes, bumps and other bumps. Driving too fast can cause the load to "bounce" and shift - in the worst case in front of the vehicle, where it then becomes an obstacle that also rapidly brakes the forklift. For this reason, you must drive slowly and with foresight at such critical points in order to prevent dangerous accidents (in which uninvolved third parties can also be involved).

In addition to the force of inertia, the frictional force, which is a result of gravity, also acts on the body. In order to move a body, the frictional force acting in the opposite direction must also be overcome. Only then can the body be set in motion. The frictional force is determined by this formula: Fw = m * g * µ. Here m is again the mass of the body, g is the acceleration due to gravity (which on earth always corresponds to 9.81 m / s²) and µ is the coefficient of friction, which depends on the material.

However, the mass does not play a decisive role in the frictional force, as can be seen from a practical example: there is an empty grid box on the forklift tines, the forklift accelerates and then suddenly brakes. The result: The box pallet slides forward a certain distance because the inertial forces acting on it exceed the frictional forces. If this experiment is repeated with a significantly heavier, filled box pallet, it becomes apparent that the box pallet also starts to move and slips off the forks.

This can only be prevented by appropriate load securing, in which, for example, individual cardboard boxes are connected to a larger unit with stretch film, so that the forces act on the entire load unit (which has a greater mass than the individual boxes). To prevent the goods from sliding off the pallet, the coefficient of friction can be increased, e.g. B. by appropriate requirements between the layers. However, it is still safest to adjust the speed to the surrounding situation, drive with foresight and avoid violent braking and acceleration maneuvers.

The last important dynamic force that every forklift operator should be aware of is centrifugal force. It works with circular movements and pushes the body away from the center outwards, and the farther, the faster the movement is. In relation to the forklift, the centrifugal force acts when cornering, again both on the forklift itself and on the driver and the load. The forklift can thereby, for. B. on wet, slippery surfaces or with worn tires in connection with high cornering speed, be "carried out of the curve", so break out and become uncontrollable.

The faster and narrower a curve is taken, the stronger the centrifugal force acts, and this in each case against the direction of travel. For this reason, curves must be driven as slowly as possible and as far as possible in order to be able to control the forklift at all times. If you take a curve too quickly and / or too tightly, you also run the risk of the forklift tipping over, which represents an enormous risk of injury for the driver and repeatedly leads to fatal accidents. 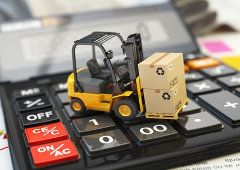 Offers for forklifts
and pallet trucks

Tip: Register for the newsletter now