Who are the good internet influencers

Whether Bibi, Gronkh or Lisa and Lena - they are not just online stars, but Influencer. The internet and social media have long since created a completely new job description: by profession an influencer. More and more - mostly young - people can answer when they are asked what they are doing on YouTube, Instagram or Pinterest, if you please. Their reach makes some television stations pale, their monthly income goes up to 50,000 euros. Sometimes even over 100,000 euros. Fame and fortune - this is the stuff of career dreams. However, the dream only comes true for a few people. And it harbors dangers ... 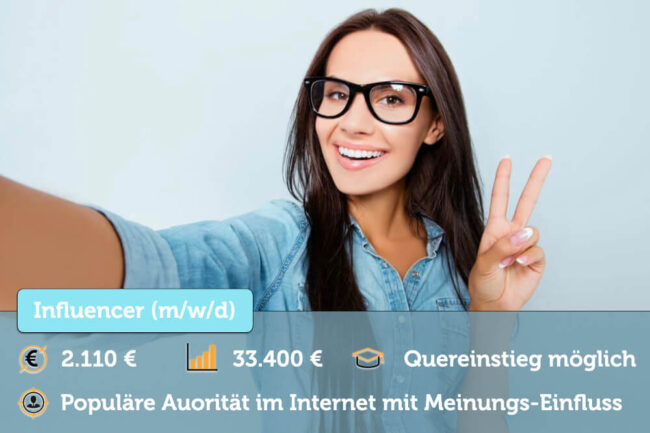 The term influencer comes from the English (to influence = influence) and describes people who (can) influence others in their opinions and purchase decisions due to their popularity, a strong Internet presence and high popularity. Therefore, influencers are particularly interesting for the advertising and marketing of products (technical term: influencer marketing). The term first appeared in 2001. The renowned US psychologist and behavioral researcher Robert Cialdini dealt with the most important properties for influencing in his bestseller “Influence: Science and Practice”. According to his studies, these include:

According to various studies, influencers reach and influence a much wider audience than traditional advertising. Because of their reputation, reach and networking, they can improve the reputation of a brand, make products better known or help them achieve a faster breakthrough. The mechanism behind it is ancient, but no less effective: word of mouth.

Your activities vary depending on what professional category they fall into. Influencers can be bloggers, Youtubers, Instagrammers, politicians, athletes, journalists, actors, musicians and generally celebrities. A science blogger has different content than a beauty influencer. However, the tasks that arise around the content are largely identical. As an influencer, you package your messages in videos, pictures, stories and blog posts and post them on a channel. Your mobile phone or a camera are a constant companion.

The job of influencer is not protected as a job title, there is no direct training. There is an Influencer Marketing Academy in Berlin, which not only imparts know-how on the subject of influencer marketing, but also trains future brand ambassadors. In “six phases”, the soon-to-be online stars supposedly learn things such as potential analysis, influencer conception, online marketing including WordPress and business planning.

But if you look at the current influencers, one soon realizes: none of them had any specific training. Most of them are talented autodidacts who have developed their talent and concept over time and have perfected them as a business model. What they all have in common, however, is that they have a high reach today - that is, many loyal fans and followers on mostly several social networks. This is the only way to reach tens of thousands of people with their posts every day.

And it is precisely this range that has to be built up first. Ideally in an interesting niche that is not yet so competitive and where you can really shine - through your personality, your talent, your eloquence and expertise and, in some cases, your appearance.

In any case, external attractiveness is not a disadvantage, especially in image-heavy networks such as Instagram, Youtube, Snapchat or Tiktok. Whether you find your niche among cupcake cooks, car screwdrivers or super mums, on the other hand, is of secondary importance. The influencing factors already mentioned by Cialdini are more decisive: trustworthiness, devotion, consistent behavior. So a lot of work. Many future influencers confuse cause and effect - unfortunately -: popularity, authority and reach are the result of personality, recognizable passion (for your topic) and a corresponding stamina (technical jargon: Volition).

To get 1,000 or 10,000 followers, relevant and interesting posts must be published on a regular basis. And this over a certain period of time, so that the followers can first recognize what the person stands for and why it is worth following them. It is precisely this initial development of a vital community that can best be described as “cleaning the door”: In addition to their own posts, future brand ambassadors must first practice self-marketing and make themselves known. Through likes and comments from other bloggers and influencers. By networking (also offline) and sharing relevant posts (from other experts).

However, real expertise only arises when knowledge and experience come together. For this reason alone, people who want to become an influencer should take enough time and work on their credibility and profession before they think about big money. The latter is - as I said - the result of specialist knowledge and diligence. Don't cause.

In fact, the earnings of influencers with large reach can easily run into five figures per month. Rake in coal online, earn a passive income, become a travel blogger social media star ... Many are currently dreaming of this dream - and overlook the hard, long work that lies behind almost all really successful influencers.

There are no fixed working hours and no security - Full-time influencers are self-employed. In the case of professions with classic dual training or studies, the industry, region, professional experience, position and company size have an impact on the salary. Such factors do not apply to the Internet to some extent or simply do not matter. Analogous to the position, however, when influencers earn, their reach plays a role. A distinction is made between nano, micro, midi, macro and mega influencers (also called super influencers):

Others, on the other hand, do not differentiate between nano and micro influencers or only draw the line from 100,000 followers. For micro-influencers, earnings of 500 to 1,000 euros per post can be in it, for “normal” influencers with 100,000 followers and more, 5,000 euros can be earned. This depends not only on the selected channel, but also on whether the picture post is supplemented by a story or video, for example.

If you compare the income of influencers with other professional groups that are also in the public eye, the following averages are shown. 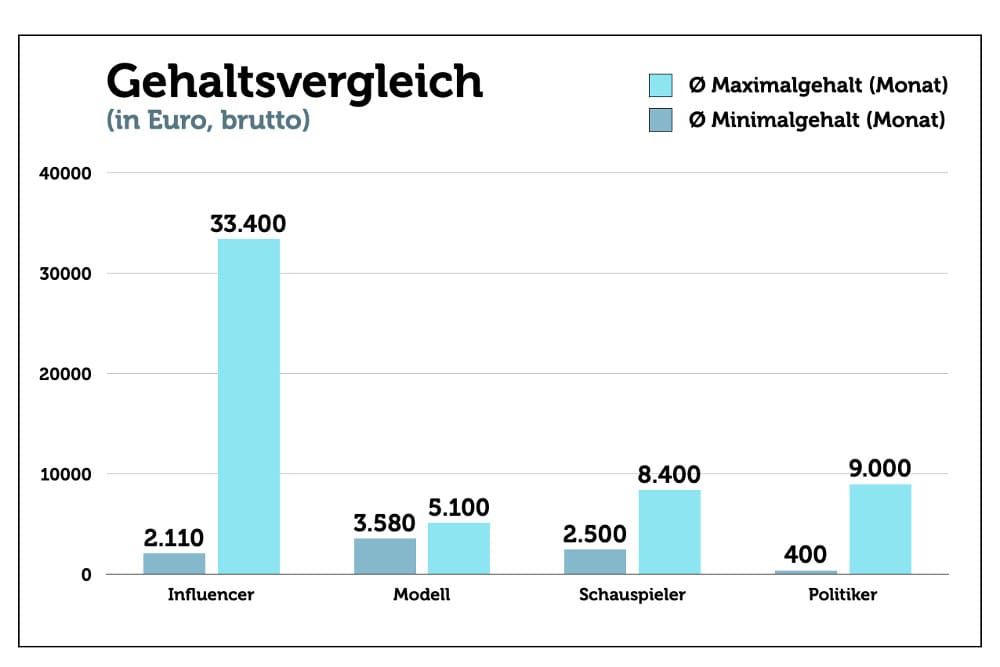 Mind you: Even among actors there are of course absolute superstars who earn 28 million euros a year. But influencers like Kylie Jenner with over 200 million followers can only smile tiredly about that: According to the US magazine Forbes, she earned almost 500 million euros last year from the sale of 51 percent of her cosmetics company. Such incomes are rather extreme among influencers.

It is noticeable, however, that even with such a new job description, very old problems arise. According to the American study by the influencer analytics company Hype Auditor, the earnings of influencers show the gender gap:

The outlook for influencers is still good. Even nano-influencers are forecast to have good prospects. The key is to find your niche. The specialist literature distinguishes three types of influencers:

To achieve fame, honor and great popularity with brilliance is the hardest road. An alternative is above-average attractiveness. For everyone else who was not born with this happiness, at least - that is the good news - there are still a few other options. They may not be too noble, but have proven themselves time and time again in the past. Not really recommended by us, but should at least be mentioned here - the tricks for more media attention:

Be vehement - no matter if you're wrong

People love self-confidence. In a world full of variables and imponderables, we secretly long for people to give us orientation. We deliberately ignore the fact that this security is deceptive and has more to do with feelings than logic.

There are psychological experiments which show that people still seek advice from ostensible experts even if their judgments have not proven to be overly reliable in the past. But why do many still sit on them again and again? Right: it's their vehemence. The more certain someone is, the more we believe them. And once we are convinced of someone, we will do a lot to support their authority - because the admission that we have been the victim of a quack would be even more embarrassing. So be absolutely sure of your cause. Also, you might just be mistakenly assuming you are wrong.

Emphasize being an expert

As soon as we are unsure about a decision, we seek advice from others - preferably from an expert. Interestingly, then this usually happens: As soon as people have received such a supposedly well-founded and plausible (!) Recommendation, they switch off their brains.

So it makes little difference whether you have thrown arrows at a dartboard or really researched while researching your relevant information. As long as your expertise sounds credible enough, most people will do (So now take this insight and ask yourself how these points came about ... Nasty dilemma!)

Differentiate yourself from the crowd

Even if you are mostly right and flexible - you will only bore your audience if you don't offend or polarize anywhere. Before you end up following in the footsteps of other thought leaders, you'd better come up with a whole new theory. In the extreme, you are simply asserting the exact opposite of what is currently the consensus.

Journalists know this principle too well in technical jargon this means the substance brush against the grain. The result doesn't have to be right in the end, but at least it's new and interesting. However, it is important with this strategy that you leave a few back doors open:

The others won't either. Because in the retrospective everything always looks very different anyway. And whoever is without sin, throw the first stone and so on. What do you care about yesterday's chatter! As long as you have an attractive recommendation ready for the future (something bold, simple, promising quick success), people would rather deal with it than with the exhausting verification of your snake oil.

PS: The 16 tips in this eBook (PDF) illustrate a little more seriously how to become an expert online. You can of course download the PDF free of charge.
Application templates: 120+ free samples
Use our other professional designs and free application templates to apply. More than 120 professional templates for CV, cover letter and cover sheet as WORD files including sample texts can be found here:

To the application templates

Back to the overview of job profiles