What are the different types of DNA sequencing

DNA sequencing is a method for determining the sequence of bases in DNA, i.e. it is used to find out how the nucleotide bases andenine, guanine, cytosine and thymine (or uracil) follow one another. This method is used, among other things, to examine hereditary diseases. In general, however, sequencing has become indispensable in genetics, as the storage location of various genetic information can be found on the DNA and is therefore essential for any DNA replication. There are various sequencing methods to determine the structure of DNA.

The foundations for these methods go back to the two classic methods of Maxam and Gilbert or Sanger, who first applied the method around 1975. The complete sequencing of a human genome was not completed until 2001.

Method of Maxam and Gilbert:

This method of DNA sequencing uses four different (dangerous) chemical substances, each of which can be used to detect a base. First the DNA is marked with a radioactive primer and then divided into single strands by denaturation. Then one of the four bases is split off from the base triplet (consisting of phosphate, sugar and the base) in four independent processes. For example, guanine is bound to dimethyl sulfate and then split off with the liquid piperidine, so that wherever guanine is missing, there is a base-less gap in the DNA strand.

The DNA strand is then split at these gaps, so that by random separation at different guanine sites, fragments of different lengths are created. These sections are now cut off at the 3 'end at a point where there was previously a guanine base. They are sorted lengthwise using gel electrophoresis so that the location of the individual bases can be read off after the four regionally separated cleavage processes.

Dideoxy method according to Sanger:

The much better known and more frequently used method is the dideoxy method (also called the chain termination method) according to Sanger, as it does not have to be carried out using hazardous substances and can be automated more easily. The process begins with the denaturation of the DNA double strand. If the DNA is in a single strand, an artificial primer is used that defines the starting point of the synthesis. Now the single strand is placed in four test tubes in which the deoxynucleotide triphosphates dATP, dTTP, dCTP and dGTP are present. In addition, a ddATP, ddTTP, ddCTP or ddGTP dideoxynucleotide triphosphate is added in a low concentration to one of the four glasses.

As with the Maxam and Gilbert methods, pieces of different length are created that are sorted according to weight (= length) using gel electrophoresis. Now, for example, an adenine can be noted at the termination points that were caused by the adenine termination nucleotide. So you can gradually determine the base sequence over the length of the sections. 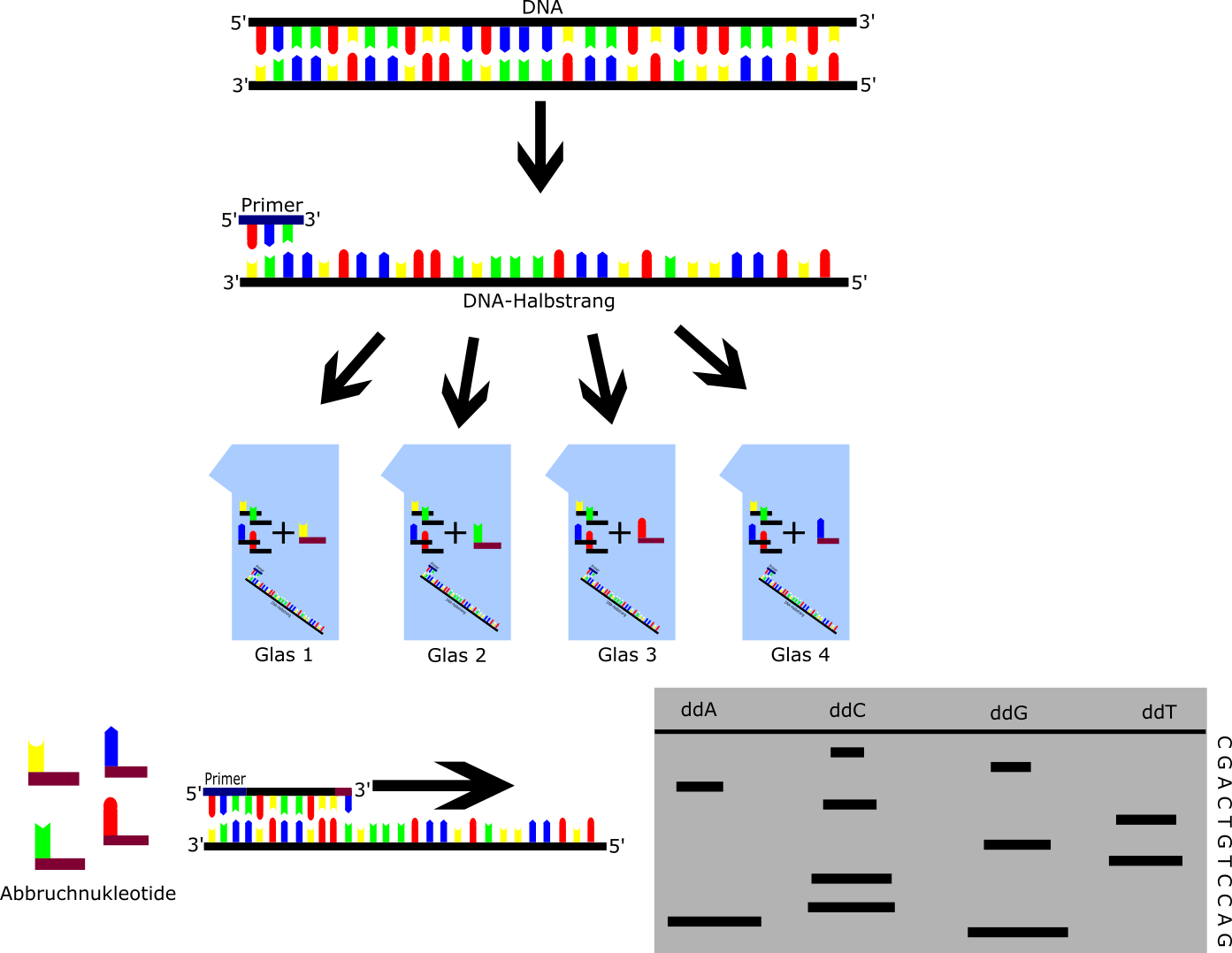