What is the retinal function

Retina of the eye (retina): structure and function

The retina (lat. retina) converts light into nerve impulses and sorts the visual information before it is passed on to the brain via the optic nerve. The retina is made up of several layers of cells that have different functions. Millions of specialized cells work together in a very small space. Neurophysiologists also refer to the retina as "Branch of the brain".

Where is the retina located?

The retina is located on the inside of the eye. On the one hand, it is fixed to the surrounding choroid via the fine blood vessels that supply it and at the same time is pressed through the vitreous humor to the outside of the eyeball. In the center (on the side opposite the pupil) is the macula (Yellow spot). In the center of the macula is the fovea, the place of sharpest vision.

Structure of the retina

The retina consists of 6 layers of cells, each of which has different functions. The light-active sensory cells (rods and cones) are not located on the light-facing outside of the retina (as one might assume), but are on the light-deviated side. There they are embedded in the retinal pigment epithelium (RPE), a thin layer that absorbs excess light and separates the retina from the choroid. Four other layers face the light - they quasi attenuate the photoactive areas and protect the sensory cells from overstimulation.

From the perspective of light, the sequence of the cell layers is the reverse of their functions.

Function of the retina (retina)

Short form: Die light information reflected from things are by the sensory cells (Photoreceptors) in electric impulse converted, which can be processed by the nerve cells of the brain. In the further layers of the retina, this individual information is amplified, bundled, compared with others and grouped in so-called receptive fields. This preprocessed information is then passed on to the brain via the ganglion cells, the axons of which flow into the optic nerve.

The individual cell layers of the retina each have specific functions.

Function of the photoreceptors

The photoreceptors can convert light into nerve impulses. Light consists of photons that move on a wave-like path with a certain frequency. The surface of a reflective object determines the frequency (i.e. the distance from one vertex of the wave to the next).

The retinal photoreceptors contain a so-called Retinal, a chemical structure that changes its spatial structure, when hit by a photon. This change is then amplified via a very complex process (so-called. Excitation cascade). If another photon hits a retinal of this cell (every sensory cell contains hundreds of them), this amplifies the impulse again. At the end of the cell is the so-called. Synapse, the transition to a subsequent cell. If the signal is strong enough, it jumps over and moves on to the next cell. The light information is thus quasi "arrived in the system".

There are two types of photoreceptors:

Their structure is similar: both consist of an "inner segment" with the outgoing synapse (nerve cell connection), the cell nucleus (blue) and the organelles required for metabolism. An outer segment is attached to this inner segment.

The mitochondria, the "power plants of the cell", are shown in green. They convert oxygen that reaches the cells via the blood into high-energy molecules. The orange-red "beans" represent the ribosomes. With the help of RNA (a kind of blueprint of the genetic information (DNA) from the cell nucleus), important proteins are formed in them. The transition, the connecting cilium, is colored purple. The disks are shown in gray in the rod - because they are only active in twilight vision and do not transmit any color information. The disks are shown in yellow in the journal. These disks contain special opsins that are particularly excited at certain wavelengths (a distinction is therefore made between cones for blue, green and red, see below). [Note: The colors in the graphic have nothing to do with a "realistic" microscopic image, they are only used to distinguish them.]

In the case of the chopsticks, this resembles a relatively long cylinder. So-called "discs" are piled up in it, similar to coins. In the membrane (shell) of these discs there is a certain protein molecule, the so-called rhodopsin ("visual purple"). The special thing about rhodopsin: it contains a structure (so-called retinal) that changes its spatial structure through a light photon. When this happens, a so-called excitation cascade begins, during which the signal is amplified until it finally runs along the nerve membrane as a nerve impulse.

The rods are very sensitive (a lot of opsin molecules), so they are especially active when there is low light radiation. Because at dusk or at night - compared to daylight - only a fraction of the photons are on the move. In daylight the chopsticks are "overwhelmed" and therefore stop working.

Sometimes the function of the chopsticks is also "Seeing light and dark"denotes, which is not correct in so far as" dark "is not seen at all. Only in the brain is the impression due to a lack of light information"dark"adds. In daylight, the rods are overwhelmed and therefore do not work at all - too ineffective: they would be permanently activated and consume vast amounts of energy dusk or when there is little light, they become active.

As the name suggests, the cones have a slightly different shape. Their outer segment is significantly shorter and tapered, like a funnel. The cones are much less sensitive because there is a million times more light during the day than at night.

There are three different types of cones, the opsin molecule of which jumps to light of different wavelengths.

The number of tenons is different:

This is mainly due to the fact that the blue cones in the yellow spot (macula) are hardly present. This is the region in the center of the light axis (opposite the eye lens) where the cones are particularly densely packed in order to achieve a high resolution.

If people don't have cones for red light or the corresponding retinal is not working properly, they cannot see red as a color. It is the same with green. This is how the widespread red-green weakness comes about. See also: Pilestone red-green glasses.

Since the cones do not work at night, we cannot see any colors in the dark.

About 80 percent of what we know (or believe we know) about the "world around us" is based on visual perception. However, from a physiological point of view, seeing is extremely complex and consumes a lot of energy. "Overall, around 60% of the cerebral cortex are involved in perception, interpretation and reaction to visual stimuli. "(Prof. Dr. Klagenfurter, Quelle). In order to work as effectively as possible, the incredibly complex light information that flows into our eyes every second is very effectively preprocessed before it is transmitted to the brain via the" optic nerve "needle. The retina is precisely specialized in only passing on what is important for the brain - or for humans.

Our brain speaks its own language - that of nerve impulses. These are electrical signals that travel along nerve fibers. Sensory cells are able to convert information "from other languages" into nerve impulses:

The presorted pulses are then sent to the Bipolar cells and Amacrine cells forwarded, which in turn further bundle and sort the visual information. This bundling and sorting is also known as receptive fields: each of these is a specific zone of the retina (several tens to hundreds of thousands of photoreceptors each) that contains the quintessence of the visual information.

If you imagine a ray of light as a straight line that penetrates the center of the eye, then the so-called yellow spot, also known as the macula, sits on the back of the eye on the retina. The photoreceptors are particularly densely packed in this region, so there are no fine blood vessels there. If you look at the retina from the outside, it is not red at this point, but yellow - hence the name yellow spot.

In the center of the macula is a small indentation, the so-called. Fovea. In this region there are only cones (approx. 60,000 pieces). The high density of photoreceptors has a special effect good resolution. The fovea in the macula is therefore the region of sharpest vision. Only the light information that is projected here by the dioptric apparatus (especially the cornea and lens of the eye) is recognized as sharp.

Since the fovea only from cones exists (predominantly red and green cones), one can no longer see so clearly in twilight or in darkened light conditions. This is particularly noticeable when reading. Especially people from the age of 25, who are slowly becoming noticeable in old age, should ensure that there is sufficient light when reading.

The nerve endings of the approx. 1 million ganglion cells have to leave the retina at one point and lead into the brain as an optic nerve. This point is slightly below the macula and slightly offset inwards (towards the nose). It is called Blind spot because there are no photoreceptors there - consequently, everything that is projected into this region cannot be seen.

"Retina" worksheets for the classroom (free) 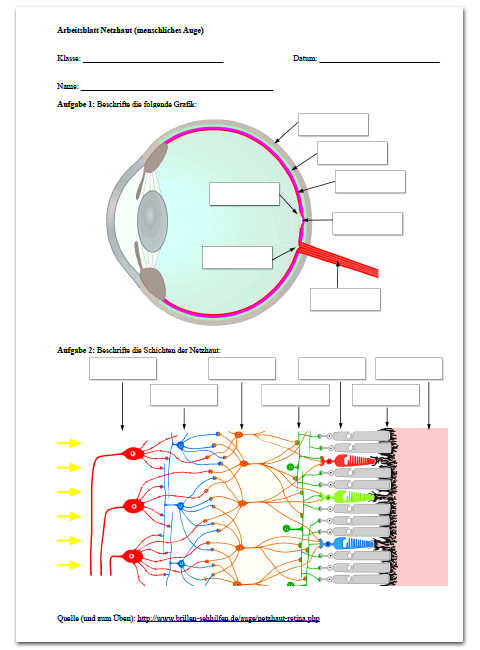 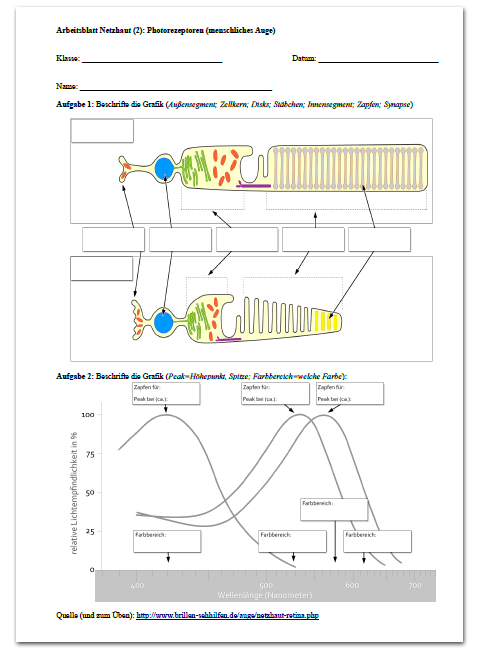 If you want to download the graphics individually, please:

The retina lies on the inside of the eye and consists of 5 layers. In the outer layer, light information is converted into nerve impulses. In the following three layers, the information from the approx. 126 million photoreceptors is bundled and sorted before it is transmitted to the brain via the ganglion cells as the optic nerve.

This website uses cookies, uses Google Analytics and shows interest-based advertising in order to operate the offer economically and to further improve it. Further information can be found on the data protection information page.