What is a missile tank destroyer 2

Danger! This news was posted on the old version of the website. There may be display problems with some browser versions.

With the upcoming update 1.59, the German vehicle tree will also be expanded to include a new category of anti-tank self-propelled guns. The RakJPz 2 will be the first German vehicle with wire-guided missile armament.

The German self-propelled gun Hanomag-Henschel Raketenjagdpanzer 2 is a tank destroyer based on the hull of the Kanonenjagdpanzer (JPz. 4-5) and equipped with two launchers for wire-guided anti-tank missiles. With an effective combat range of 800 to 3000 meters, the RakJPz 2 was designed as a supplement to the German main battle tanks armed with guns of the post-war period and the cannon tank destroyer, in order to be able to fight armored targets effectively even at greater distances.

In contrast to the Kanonenjagdpanzer, the Raketenjagdpanzer did not have a main gun installed. This offered enough space for a four-man crew, an automatic loading mechanism for the rocket projectiles and a front-facing machine gun for close-range defense. As a makeshift defense against air targets, an anti-aircraft machine gun was mounted on a mount on the superstructure.

The positions of the commander and driver are now in the front of the vehicle and both are equipped with improved vision devices. The gunner, also called the steering gunner on the RakJPz 2, has a panoramic telescope through which he can guide the wire-guided missiles safely to the target. The changed crew positions and optical systems can be clearly seen on the 3D model of the vehicle in the game as a difference to the JPz 4-5.

The RakJPz 2 belongs next to the Soviet IT-1 to the new category of vehicles in War Thunder that are exclusively armed with missiles. The armor protection is minimal compared to assault guns of the war time with only 50 mm at the front of the hull and can only offer inadequate protection against direct hits even when strongly angled. This disadvantage is offset by the excellent combat power of the main armament: The wire-guided French SS 11 missiles are able to cut through up to 60 centimeters (!!!) rolled armor steel in the event of a direct hit! Two rockets are in the starting position and can be fired before the reloading process has to be reloaded. 14 rockets are available as payload. Without a doubt, the rocket destroyer 2 will become a real monster in the tank battles of War Thunder!

In addition to the excellent armament, the RakJPz 2 takes advantages of the hull of the JPz 4-5. With an excellent top speed of 70 km / h both forwards and backwards, this tank destroyer is a symbol of the doctrine of mobile warfare in post-war Germany and an excellent complement to the Leopard I and JPz 4-5. Nevertheless, the commander of a RakJPz 2 should always remain vigilant in order to avoid detection by enemy troops as best as possible. The low profile will be of particular advantage here - that shrewd commanders can use to get themselves into the firing position without revealing more than the launcher and the target sight. 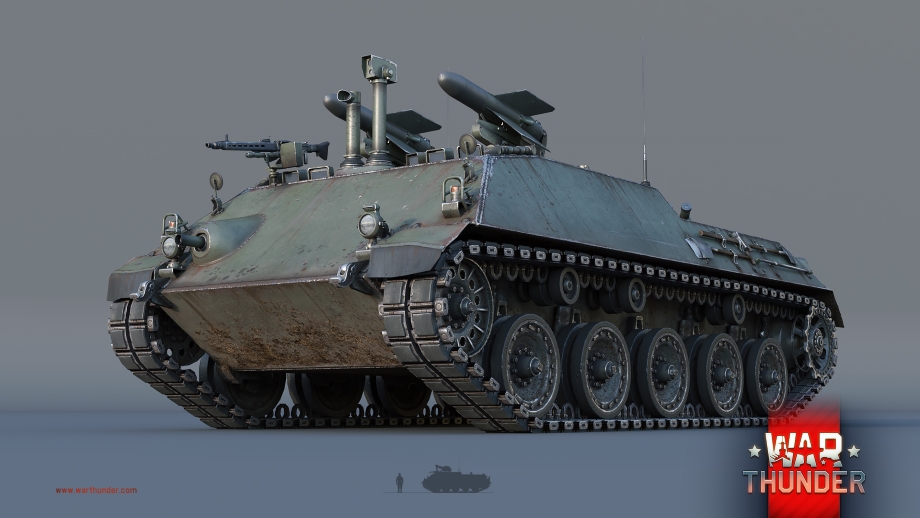 You will soon be able to experience this German technical masterpiece in action.
Update 1.59 is not far away!