Has feminism evolved into something poisonous?

"It feels like everywhere else in the world. Whether women are told to dress more tightly or to veil themselves - the decision of what is appropriate seems to be made in patriarchal societies and not by the women themselves," says Shehzil Malik. The 30-year-old artist from Pakistan found the burkini ban imposed in France in 2016 to be particularly offensive. After all, it shows in a painful way how women's bodies are being monitored globally.

Malik made the decision to give women back control over what they wear. To this end, she created Pakistan's first feminist fashion collection in October 2017. Their designs represent personalities who break the boundaries of the Pakistani image of women.

Some of these women have shawls around themselves, others have their hair down. Some are dark in complexion, while others are light skinned. Some have tattoos, others jewelry. Some ride bicycles, others read books. What they have in common: They are all formidable. "These are women who stand up to the gaze of their counterpart without being intimidated," emphasizes Malik. 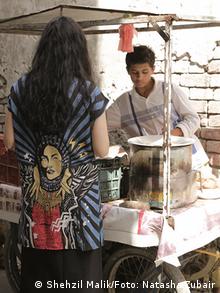 Shezil Malik's aesthetic is characterized by the generous use of color

Malik's artistic journey began in 2015 when she started making illustrations. Her subjects were women's experiences in public. An illustration of a girl walking down a street became particularly popular. It shows their humiliation through the voyeuristic looks of quite rude guys. Her deep insecurity and her inner monologues appear on her clothes: "Isn't my skirt long enough?" or "Is my chest covered?" Throughout her ordeal, she constantly admonishes herself to "just move on".

After Malik posted the picture on her Notes to Self blog, it garnered widespread approval from women sharing their inner monologues around the world, "in Pakistan, India, Germany, the UK and the US". Inspired by this work of art, and equally affected by the arbitrary clothing norms that determine their place in society, these women told their own stories on the subject.

When Malik realized that her art could boost women's self-esteem and inspire them to assert themselves in public, she decided to "draw pictures of women that other women can look up to - for example because it's a Pakistani one Is a girl who feels comfortable in her own skin, "says Malik. "I wish I could be like her too! After all, I make these drawings for myself. This is how I create such role models for myself in art."

As a woman who grew up with Western pop culture but does not see herself represented by it, Malik has developed a visual language that reflects the global dimension of her Pakistani experience.

In her essay on feminism and fashion, Nigerian author Varyanne Sika describes how clothing and fashion determine social identity. "Getting dressed every day is a mandatory and non-negotiable activity for most people; we can almost never realize our own preferences," writes Sika. "Instead, we decide how to carry out the dressing process."

At the same time, she adds, fashion symbolizes both rural and urban areas, class characteristics in societies that "distinguish between women who can afford to be in fashion and those who cannot."

With sales prices of around eight to 40 euros per item of clothing, Shezil's work in the fashion company "Generation" is more likely to be worn by women who, due to their social status, already enjoy a certain degree of protection in public. In addition, the limited edition of the collection creates a touch of exclusivity that flatters the customer's sense of individuality. At the same time, the universal message that is typical of Malik's work is underlined.

Advertising through street art in the streets of Lahore

Malik has no illusions about the possibilities of influence fashion has on social change: "It is difficult to talk about public places in Pakistan without realizing the class differences that exist here." 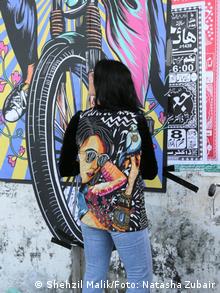 Not wanting to see her characters confined to retail stores or billboards, Malik decided to take them to the streets as part of a street art project. Under a bridge in her hometown of Lahore, she found a place where all kinds of people meet - dealers, pedestrians, bikers, motorists. With the help of her sister, friends and employees, she put up a 3.50 meter poster at an intersection showing a woman. "Soon a small group of onlookers gathered there, wondering what we were doing. With the help of a lot of glue, a high ladder and suggestions from the crowd, we finally managed to put a gigantic female figure there, standing over a bicycle the bridge rings. "

The next morning, Shehzil's fearless cyclist was gone. She left some questions: Was it removed because someone fell in love with it or because someone was bothered by its presence?

"More power to the powerless"

Most of the time, clothes for women are made to please men. But Malik hopes that her new collection will encourage women to "see their own inner strength". 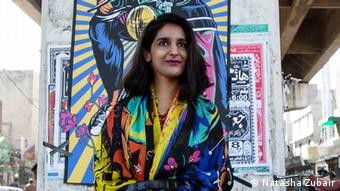 Shezil Malik also likes to be colorful herself

"The intent behind making these clothes was to convey a message of hope and strength - that the younger generation would develop for themselves the ambitions that are expressed in the art of the collection," explains Malik.

While her fashion is accompanied by good intentions, making her affordable for women of various social backgrounds remains a challenge. However, Aisha Ahmad, a Pakistani researcher at Oxford University, notes: "I think it is an irrevocably good thing when women enforce their heterogeneity through fashion - strong and angry and tender at the same time".

"How much that goes beyond different social classes, geography and culture is a question we have to ask ourselves if we don't want to lose ourselves," added Ahmad. "More power to the powerless. Always."

This story is part of Well-connected women, a project of the European Journalism Center. It tells the stories of women who use the internet to enforce equal rights for women in Pakistan. You can find more such stories at @wconnectedwomen.